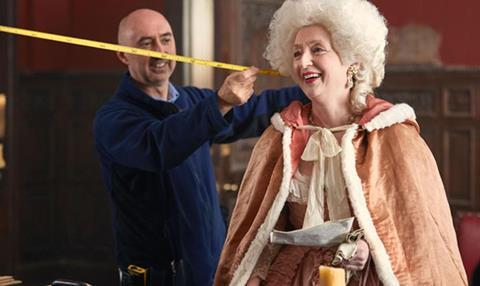 Based on Harris’s List Of Covent Garden Ladies, an 18th-century guidebook to local sex workers, the drama – created by Moira Buffini and Alison Newman – follows a brothel owner raising her daughters in Georgian London.

Owen, an executive producer, says: “London was literally being built on the backs of these women and we wanted to give them a voice.”

The Elizabeth producer – who launched Monumental with Debra Hayward in 2014 – says a roster of all-female writers and directors helped to “set the tone and sensibility” of the drama, though the set-up may change in future series.

“It was a smooth transition from the writing through to the director, the actress and to the audience – it was uninterrupted and made it feel really truthful.”

Harlots is also distinctive for the rock music that punctuates the period scenes.

Executive producer Alison Carpenter says: “None of us wanted swooping strings. It veers from guitar rock to big drums and sometimes a hip hop feel.”

Owen adds: “People have been freed up in terms of historical drama. There’s been a gradual acceptance by the audience for things to be looser, and not very chocolate-box.”

Harlots was first developed at Channel 4, with Hulu coming in as a partner, but when the “economic dynamics” didn’t work out, the project went to ITV, with Hulu still on board. ITVS GE director of global content Julie Meldal-Johnsen calls

Harlots a “fascinating new take on the world’s oldest profession”. “It’s edgy… there’s a rawness to it that’s really appealing. It’s exciting that it’s an all-female-produced show,” she says.

So why place it on ITV Encore? “Creatively, it allowed the co-pro between Hulu and ITV Encore to buy into the same vision – not into a more controlled and edited version.”