“May be just a bit too woolly and broadbrush to make a hit in the grander scheme of things. But it finds its target often enough to be more than worth your while” 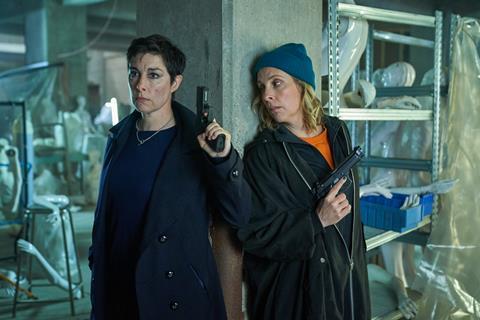 “This plays into and off Mel and Sue’s natural and long-established dynamic so naturally that if you have come across them before and not found them to your taste, you will probably be unlikely to laugh at their semi-murdery misadventures here. But for fans, there’s a lot to enjoy. It’s fun and daft – unsophisticated enough to give it an enjoyably homely feel but never descending into idiocy. Hitmen may be just a bit too woolly and broadbrush to make a hit in the grander scheme of things. But it finds its target often enough to be more than worth your while.”
Lucy Mangan, The Guardian

“This new sitcom features the exact same Mel and Sue double act that has become so familiar to us over the years. The same delivery, the same comic timing, the same dynamic of Mel being the slightly sweeter, dimmer one and Sue being the slightly cooler, cleverer one. I bow to no one in my love for Mel and Sue on Bake Off and as presenters – both together and apart – they’re great. But they’re not actors, and this project should have been quietly dispatched before it hit the screen.”
Anita Singh, The Telegraph

“I watched with a heavy heart, pen poised to slate what I expected to be a twee tale of jolly middle-aged duffers being too nice to bump people off and it all being a bit Enid Blyton-does-Pulp-Fiction. But guess what? Hitmen was slapstick, but it was also twisted, dark and merciless and they certainly weren’t too cuddly to kill. The concept might tire quickly but, credit where it’s due, this fair cheered me up.”
Carol Midgley, The Times

“Neither Mel nor Sue could muster the energy to deliver their lines with any gusto. The joke here was not dissimilar in Jack Whitehall’s Sky One series Bounty Hunters. But the ‘hitmen’ element of the set-up is so carelessly sketched that it feels like a hindrance, something the writers keep reluctantly having to return to. It’s as if a straightforward sitcom is itching to get out but stifled by a zany plot. Every time you began to warm to the characters and enjoy exploring their complications, though, a honking great set piece crashed in, bullets flying, blood splattering up the wall.”
Rupert Hawksley, The i

“This is a comedy that I might not have given a second glance, pre-crisis. Now, I fall on it with the level of gratitude I would otherwise reserve for an Ocado delivery slot. The punchlines are visible from space and I can’t reproduce any of the jokes here because the script isn’t particularly funny. Spencer Jones isn’t even, really, a master of physical comedy. But he imbues the whole thing with a low-key charm.”
Anita Singh, The Telegraph

“This lifted my spirits. Briefly. However, the premise while refreshingly simple, dragged on far too long. Jones’s performance was quality, and there is a place for old-fashioned, unhurried comedy in the era of fast-cracking, gag-every-line sitcom. Yet it felt like a short Morecambe and Wise sketch stretched out to half an hour.”
Carol Midgley, The Times

“This wonderful documentary series has never really been about education. It is about time and how the passing of time alters people; how it carries some of us forward and leaves others behind. It was both hopeful and sobering to watch as these three young men lay the foundations for the years – the time – ahead of them.”
Rupert Hawksley, The i