It has been a tumultuous year for US politics as the country approaches a landmark presidential election in November. 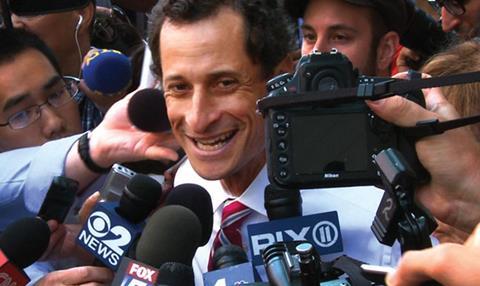 International broadcasters keen to further explore the fear and loathing of the political process could be encouraged to acquire Weiner, a 90-minute feature doc about disgraced congressman Anthony Weiner, who is married to Huma Abedin, one of Hillary Clinton’s closest advisers.

The doc, which won the most coveted award at Sundance, the Grand Jury Prize for Best Doc, is directed by Josh Kriegman (Made) and Elyse Steinberg (The Trial Of Saddam Hussein).

It follows Weiner as he attempts to make a political comeback and become Mayor of New York, following a series of revelations about his sexual indiscretions.

The scandal – in which Weiner sent sexually explicit photographs of himself via Twitter under the pseudonym Carlos Danger – forms a major part of the film.

Steinberg and Kriegman, who was Weiner’s chief of staff before he moved into film-making, had unprecedented access to Weiner and his family as the scandal broke.

The doc includes footage of the Democratic politician playing at home with his son, searching for campaign donations and debating the level of involvement of his wife.

It will be released in US cinemas on 20 May by IFC’s Sundance Selects label, and will air on premium pay-TV channel Showtime in the autumn.

International television sales are being handled by Dogwoof. “Weiner is a rollercoaster ride of a story about an American mayoral candidate caught in a sex scandal, and the consequent media circus that enfolded him and his family,” says head of international TV sales and acquisitions Vesna Cudic.

“The film has amazing access to the main protagonist and is very timely. It comes in the year of the presidential elections, and offers a rarely seen insider view of American political campaigning.”

The UK firm has been stepping up its involvement in international TV sales over the past two years as the line between high-end feature films and television blurs.

The company will be selling a raft of other docs at Mip TV, including Roger Ross Williams’ Life Animated, which explores an autistic man’s life through his obsession with animated Disney movies.