Really? You’re that excited by that dough mixer or that knitting machine? 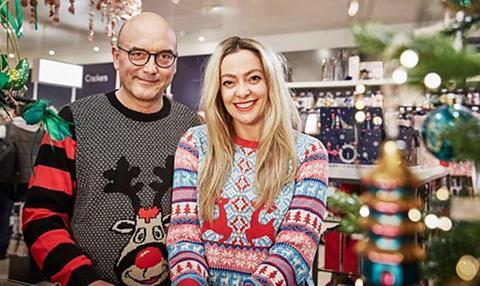 I’ve been round a few factories, and I never thought: you know what, this would make brilliant television. Gregg and Cherry try to make it brilliant television by being shouty and very, very enthusiastic about everything, to the point that I don’t believe them. Really? You’re that excited by that dough mixer or that knitting machine?
Sam Wollaston, The Guardian

It was Noddy Holder, was it not, who established the link between seasonal good cheer and shouting at the top of his lungs. That ceremonial mantle has now been passed to MasterChef’s resident town crier Gregg Wallace.
Jasper Rees, Daily Telegraph

The “here today, dumped tomorrow” nature of wrapping paper, of course, makes it a good business to be in, but it was less clear how anyone could earn a crust from the tinsel trade.
Matt Baylis, Daily Express

There is innocent pleasure in finding out how things work. Inside the Christmas Factory provided it last night.
Andrew Billen, The Times

There was enough of a travel budget for transatlantic trips to New York and Panama, although, Bussell not being a historian, it was never quite explained what Fonteyn’s role was in the failed coup, nor quite how deep her subsequent disgrace was.
Jasper Rees, Daily Telegraph

It’s a lovely portrait of the dancer every ballerina – Darcey included, she says – wants to be.
Sam Wollaston, The Guardian

You might say she [Bussell] made a melodrama out of her heroine’s life, but it was melodramatic anyway.
Andrew Billen, The Times

Full of blood and curses and cut-out hearts, the world of fairy tales is anything but charming – and the very opposite of what’s required in a bedtime story.
Matt Baylis, Daily Express

Think how quickly real history is forgotten. For these stories to have survived so long, they must contain something so powerful it is almost magic.
Christopher Stevens, Daily Mail