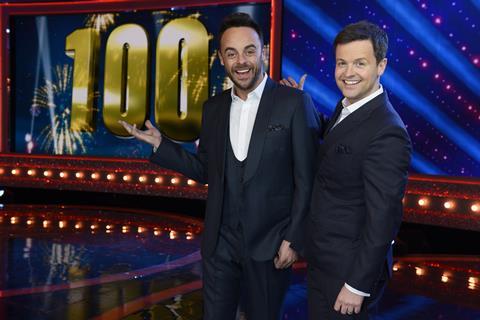 The fifth episode of the live show was due to air in its regular 7pm slot on Saturday 24 March, with guests including Alan Carr and cast members from Coronation Street.

ITV has moved The Voice forward from its scheduled 8.30pm slot, with a repeat of Through the Keyhole now airing at 9pm, folllowed by the news at 10pm, brought forward from 10.30pm.

The broadcaster said it was “reviewing options” for the remaining two episodes of the 15th series of Takeaway, but confirmed that McPartlin will not feature in either edition.

A spokesman said: “ITV has taken a joint decision with Ant and Dec’s team not to broadcast Saturday Night Takeaway this weekend.

“We will be reviewing options for the last two episodes of the series (31 March and 7 April), which would not feature Ant, who is taking time off to seek treatment. We very much hope that he gets the help that he needs.”

McPartlin was arrested on Saturday on suspicion of drink-driving after a collision involving three vehicles in south-west London.

The star spent two months in rehab last year after admitting his painkiller and alcohol addiction.

Questions have been raised as to the future of the show should McPartlin, who co-hosts the Saturday night series with Declan Donnelly, not return for a subsequent series.

The pair have been a presenting act since 1994 and the recently hosted their 100th episode alongside regular supporting hosts Stephen Mulhern and Scarlett Moffatt.

Alongside Coronation Street, the show is currently ITV’s biggest show on air and the latest series has delivered an overnight audience of 7.3m (36%) and a 45% share of both 16-24s and 25-34s.

The variety show was first broadcast in 2002 and aired until 2009. It was revived in 2013 and is co-produced by ITV Studios and Ant and Dec’s TV company Mitre Television.

It is currently filmed at ITV’s London Studios, which is due to close and would need to move to a new studio if it is recommissioned.