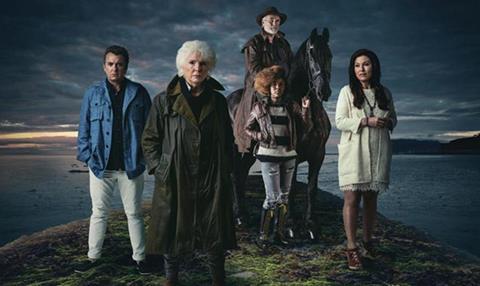 “It may only be six episodes but everything else – performance, lack of subtlety, a focus on the emotional, melodrama, cliches, even the pub – smells of soap. Nothing wrong with that, I always enjoy EastEnders when I get involved, but I’m not so keen on pretension. Kat and Alfie thinks it’s Broadchurch meets The Wicker Man, but really it’s EastEnders somewhere else.”
Sam Wollaston, The Guardian

“Thankfully, there’s enough substance in the murky plot to warrant further intrigue. Director Jesper Nielsen has compared the show to Twin Peaks and Broadchurch and that is a bit of a stretch. Judging by this first episode, Redwater is like neither of these – but it’s still a serviceable mystery that rattles along without any elaborate conspiracy.”
Rachel Ward, The Telegraph

“A series that prolongs the winning partnership of Shane Richie and Jessie Wallace by simultaneously reviving Ballykissangel. I won’t reveal it in case you haven’t yet watched, but I am not sure whether to pronounce the final twist a betrayal of the heavy-blanded tone of the previous 55 minutes or rejoice at the promise of something more exciting.”
Andrew Billen, The Times

“Ambitious and far removed from Albert Square, starring two of the soap’s best-loved characters, it must have looked on paper as if it had a real chance of success. Not a hope. The six-part series was doomed before it started, because neither writer, cast nor anyone else had a clue what sort of story it should be.”
Christopher Stevens, Daily Mail

“While the channel’s comedy and drama output has been exciting and diverse recently, the exploitative nature of its documentaries is still troubling, as with Shut-Ins: Britain’s Fattest Woman. The film’s saving grace was Hill herself. Petulant and faint-hearted, her disposition by the end of the show was sunnier and more resolute.”
Patrick Smith, The Telegraph

“There was a twist of sorts, at the end of the otherwise wearily familiar documentary. I felt for them both, and yet still felt like a voyeur.”
Andrew Billen, The Times

“This was a moving and troubling story but my problem was the dogs. Who took them for walks. Did they take themselves out, with poo bags and treats in little barrels, like a St Bernard?”
Matt Baylis, Daily Express