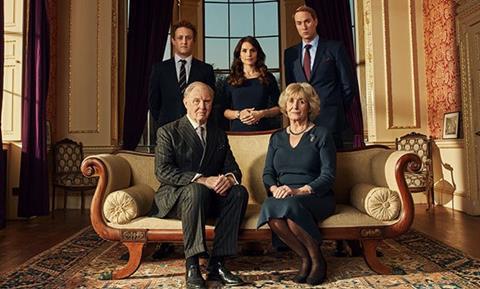 “King Charles III made for a powerful provocation onstage in London and New York. On BBC2 – hot on the heels of the Duke of Edinburgh’s retirement, and Prince Harry’s confession of mental anguish after his mother’s death – it was pure televisual gelignite. Plays don’t always migrate well to the small screen, but this was deftly filleted.”
Jasper Rees, The Telegraph

“The blank verse was at first distancing but my ears quickly attuned and began to love its music; the dialogue was frequently beautiful. Mike Bartlett has the makings of a superb and original television writer confident enough to reach beyond naturalism.”
Andrew Billen, The Times

“The speaking in verse bits didn’t seem or sound ‘bold’ so much as misguided, weird, different for the sheer sake of being different, showing off and above all else, distancing the audience from what was in effect a regally good story. I wouldn’t say it was up there in terms of pace, tension, drama or believability with any other political thriller I’d ever seen but it was outstandingly good as a study of characters.”
Matt Baylis, Daily Express

“The intoxicating BBC drama cleverly combines political drama and family conflict with astute observations about the state of our democracy and the purpose of the Royal Family. Charles was played with skill and poise by the late Tim Pigott-Smith, who captured the King’s internal dispute perfectly.”
Chloe Hamilton, The i

“The idea that Charles refuses to sign a bill and then exercises an ancient right to dissolve parliament is quite a big ask. But otherwise it’s a spot-on political thriller that gains in momentum. It’s funny, too, as well as apposite and tragic.”
Sam Wollaston, The Guardian

“It seems there’s a documentary set at an airport, or on a cruise ship, or on a stretch of motorway, every night… and most of them are padded with interchangeable scenes featuring maintenance men. This series would be far more entertaining if it just followed unflappable Sue as she pacified the passengers.”
Christopher Stevens, Daily Mail

“Before I saw Sue, I was tempted to wonder if there was a single aspect of civil aviation, from the maintenance of the runways to the plumbing of the loos, that any viewer needed one more minute of television to reveal to them. But Sue revealed a lesser seen and most important side – the human one.”
Matt Baylis, Daily Express

“Fans of Nigel Farage’s infamous anti-migrant poster may snark that the script overlooked the mostly young and male element of the migrant demographic. If so, they weren’t watching properly. Due to its late-night broadcast, the drama may not have had a huge audience, but I think viewers, young and old, should head for Home”
Jasper Rees, The Telegraph