It’s warm and funny, yet with enough edge to prevent it from being disposable fluff. 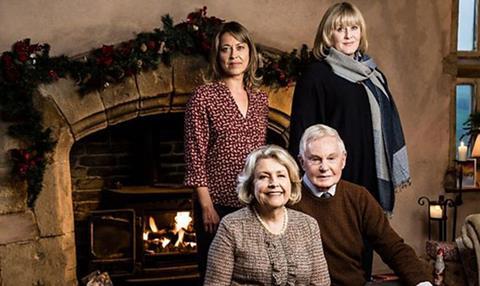 Look past the pretty landscape and the Noël Coward jollity, and there are family tensions and resentments about relationships and wills, or just about life’s disappointments, simmering away. Possibly something like next weekend, at yours?
Sam Wollaston, Guardian

Last Tango in Halifax is a hard show to dislike. It’s warm and funny, yet with enough edge to prevent it from being disposable fluff.
Ben Lawrence, The Telegraph

After three series of plots so highly lathered they were downright soapy, Last Tango is too convoluted for simple summaries, and anyone coming to this Christmas special for the first time would have been helplessly confused.
Christopher Stevens, Daily Mail

Ultimately, Prince Harry came across as a very practical person whose ambitions of goodwill were driven not by ego but by a basic human need to help others.
Ben Lawrence, The Telegraph

Here he is then, hugging his 15-year-old friend Mutsu. “Good man, I got your letter, where’s our tree?” he asks,about the one they planted earlier, when Mutsu was a little boy. Harry does a lot of hugging: I don’t think he got that from his father.
Sam Wollaston, Guardian

If the whole programme had been about his earlier years it would have worked better, not just for going deeper into the life of the young “comedy jukebox”, but as an interesting perspective on the state of British TV in the racist old 1970s and the alternative-comedy era of the 1980s.
James Jackson, The Times

Presented without the false modesty of many a tribute, Sir Lenny seemed plainly delighted, if bemused, by the path his life had taken, not least when he discovered Shakespeare in middle age and carved out a new niche for himself as a classical stage actor.
Matt Baylis, Daily Express