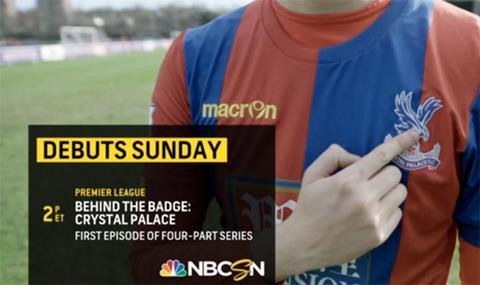 Goalhanger will follow the fortunes of the Premier League football club over a period of three weeks for the 4 x 30-minute series, which is titled Behind the Badge: Crystal Palace and launches in America on Sunday.

Filming got underway days before Crystal Palace’s FA Cup third round victory over Southampton last Saturday and has continued this week ahead of the first episode airing at the weekend.

Goalhanger will continue filming Palace’s upcoming fixtures against Aston Villa, Manchester City and Tottenham Hotspur for a further three episodes. The idea being that the club’s preparations for each game is captured, as well as the fallout from every result.

Lineker will narrate the series, while his business partner Tony Pastor will oversee the filming in the UK. Rushes will be sent to NBC Sports in the US where they will be edited into a pre-agreed structure for each documentary.

Pastor, the former ITV Sport controller, said Palace has sanctioned a “remarkable” level of access, allowing cameras to capture the players training, dressing room preparations for matches and boardroom negotiations over transfers. The crew also has the power to interview members of the first team and manager Alan Pardew at short notice.

“The only thing Alan won’t allow us to film is team talks about the opposition. As a mark of respect, he doesn’t want to discuss other teams’ weaknesses on camera,” Pastor said.

He is fan of HBO series Hard Knocks, which follows a different NFL team’s preparations for the new season, and was intrigued by why it had not been attempted by a Premier League club in the UK. He met with NBC Sports soccer producer Pierre Moossa where the access was agreed.

Behind the Badge: Crystal Palace is unlikely to air on a UK broadcaster, but Palace will aim to make it available on its website.

Goalhanger’s other recent projects include BBC1’s Wayne Rooney documentary Rooney: The Man Behind the Goals.