TV Critics: Man in an Orange Shirt; The Accused: An Inside Job?; Public Enemies: Jay-Z vs Kanye

“A bit like Brokeback Mountain with a stiff upper lip” 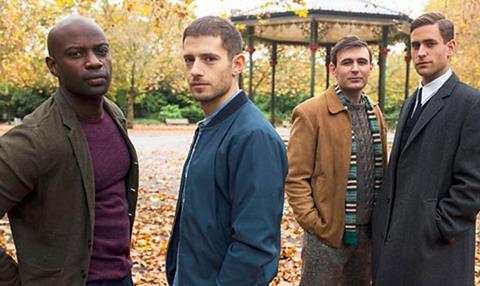 Man in an Orange Shirt, BBC2

The first part of Patrick Gale’s terribly British drama about thwarted love in the 1940s was a bit like Brokeback Mountain with a stiff upper lip — two dreamily handsome chaps fall in love, become trapped by the strictures of societal conventions and fail to find a happy ending together.
James Jackson, The Times

Performance-wise, Frances de la Tour brought enormous sympathy to the role of Thomas’s mother Mrs March, while [Oliver] Jackson-Cohen and [James] McArdle personified brilliantly the two poles of the dilemma gay men faced: to bow to social convention and die inwardly or live a true life and be pilloried for it.
Gerard O’Donovan, Daily Telegraph

Thwarted love is the driving force, but Man in an Orange Shirt does a beautiful job of showing the consequences of repression for all during this time of upheaval.
Rebecca Nicholson, The Guardian

I like my period dramas romantic, but slightly gritty. This looks like a picture perfect postcard of middle-class married life, but beneath the facade there is something much more complex at play.
Daisy Wyatt, The i

The Accused: An Inside Job?, Channel 5

Similar documentaries have let us spy on a murder probe and a child cruelty investigation. This is psychology in the raw. The only complaint is that it’s over too quickly. Channel 5 could air all the footage from a case non-stop, over 24 hours, and we’d still be glued.
Christopher Stevens, Daily Mail

Was it possible to believe that such a smart young man could be such a patsy? Hardly. He looked to me as guilty as a dog in a sausage shop.
James Jackson, The Times

Billed as an exposé of their turbulent friendship, the film failed to provide any answers to the big questions (do Beyoncé and Jay-Z really loathe Kim Kardashian? Why? Exactly who owes who money?) – but that by no means made it unrewarding.
Ben Bryant, Daily Telegraph