Man vs. Wild; This Way Up; Fugitives; Fake or Fortune?

“It is hard to think of a more monstrous exemplar of our times than this Putin-style propaganda exercise.” 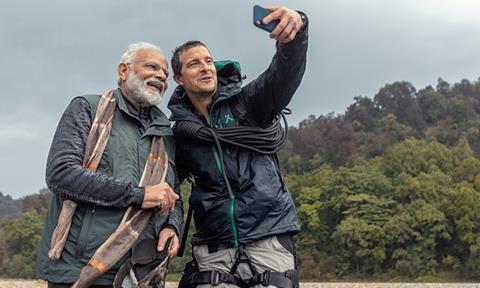 Man vs. Wild with Bear Grylls and PM Modi, Discovery

“It is hard to think of a more monstrous exemplar of our times than this Putin-style propaganda exercise. One wants to say what next, but the truth is this is it.”
Chitra Ramaswamy, The Guardian

“With the tricky opener out of the way, this second episode distributed the com and sad more equally, allowing other characters to grow alongside Aisling Bea’s Aine.”
Gabriel Tate, The Telegraph

“This Way Up is fragmented, with scenes strung together rather than woven. It sometimes spirals so deep into Aine’s anguish that it forgets even the most self-absorbed sitcom must have jokes. But when it remembers to be funny, it offers plenty of old-fashioned laughs.”
Christopher Stevens, Daily Mail

“The introduction to Fugitives had the unmistakable tang of a daytime show fronted by Rav Wilding or Dom Littlewood, transposed to prime-time and looking woefully out of its depth. For all the hi-tech methods of trace and capture it depicted, Fugitives felt like a throwback: ropy reconstructions, graphics from a late-90s video game and portentous soundtrack.”
Gabriel Tate, The Telegraph

“If you ever feel a peevish shiver of schadenfreude whenever someone presents what they think is a stonkingly valuable heirloom to a TV show only to be told, ‘Nah, sorry mate. Nothing special’, (guilty!) then last night’s Fake or Fortune? was catnip. This is an immersive format in which you learn about art without even noticing. It also shows that the art world is full of murk, and family history often a swirl of Chinese whispers.”
Carol Midgely, The Times