Midsomer Murders; The Apprentice; Strictly Come Dancing; It Was Alright In The 1970s; Tree of the Year

For such a talkative, boastful programme it was a small miracle that Alana and Courtney even made it on, let alone to the final. 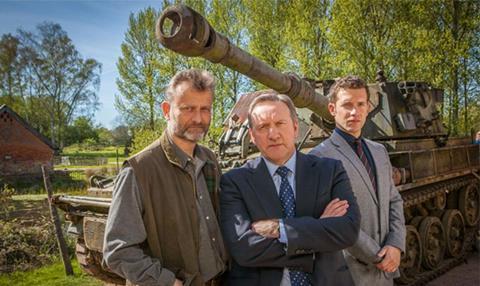 The performances were hammier than a gammon joint, too. Guest stars Hugh Dennis and Sally Phillips, both better known for comedy, looked like they were planning a stern word with their agents.
Michael Hogan, The Telegraph

Sometimes, Midsomer can be a little too British. We do like a good planning application in this country, and this episode had three, which were described in some detail. That’s taking the thrill of bureaucracy too far.
Christopher Stevens, Daily Mail

The Apprentice: the Final, BBC1

For such a talkative, boastful programme it was a small miracle that Alana and Courtney even made it on, let alone to the final. They can only have slipped through that eye of the needle reserved for young people with genuine commercial acumen who might, therefore, not immediately lose Alan Sugar his £250,000 investment.
Andrew Billen, The Times

This has easily been the dullest series to date. It was fitting that the proposed businesses were also the least inspiring and ambitious.
Christopher Stevens, Daily Mail

I said a few years ago — exhibiting, I was told, casual sexism — that that year’s final had been exceptionally hormonal. It was nothing compared to the blubbing by the men on Saturday night.
Andrew Billen, The Times

Although Channel 4 has subjected us to a shipping weight of cheap shows following the same clip-wisecrack-clip format, Saturday’s offering was definitely one of the better ones.
Matt Baylis, Daily Express

Tree of the Year, Channel 4

The term “tree-huggers” is always used with an edge of malice but as this rather wonderful show proved, the fortunes of men and trees are locked in an eternal embrace.
Matt Baylis, Daily Express