The convergence of media, entertainment and technology will dominate NAB 2017 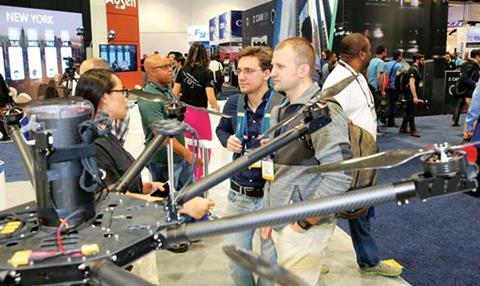 The theme at NAB 2017 is ‘The M.E.T. Effect’, the convergence of media, entertainment and technology, fuelled by internet connectivity and integrated systems, and growing consumer demand for more digital content and immersive experiences.

And, as usual, the major manufacturers will be showing their latest products.

Blackmagic Design (SL216) has launched a new version of its Ursa camera and unveiled two grading panels for its editing and colour correction software.

The Blackmagic Ursa Mini Pro camera has a 4.6K image sensor with 15 stops of dynamic range.

Blackmagic chief executive Grant Petty says: “The Ursa Mini has been a real success. However, we wanted to design a new model that delivers many of the features customers have been asking for, so it’s even more powerful and faster to use.”

Petty says the Ursa Mini Pro is three cameras in one. “It combines high-end digital film quality with the features of a broadcast camera,” he says. “It can be used for digital film, broadcast and live production.”

Also new is FormatFusion4 HDR conversion for the Kahuna production switcher line-up, and support for 4K and HDR conversion in the mid-range KudosPro and UHD1000 products.

Facilis (SL7920) is launching Hub Server, a performance aggregator that can be added to new and existing TerraBlock systems and is able to optimise drive sets and increase the bandwidth available.

Signiant is also introducing functionality that enables authorised users to access their files from anywhere, on any device, to take advantage of accelerated transport. System administrators can maintain full control and visibility of each transfer.

The latest version of FlashNet CMS on show at SGL (SL5306) includes integrated archiving to Amazon’s S3 and Glacier platforms, as well as support for Ci, Sony’s cloud-based service.

There are also enhancements to the FlashNet Infinity User Interface, including a navigator tool and support for AXF objects and Sony ODA 2.

Editshare (SL9716) will display its enhanced XStream EFS system, which is able to dynamically defi ne the combination of storage technology and fi le protection applied to media and project spaces.

Highlights on the Rushworks (SL12713) stand include Locked On, an object tracking innovation that the company claims eliminates the need for video camera operators, as well as upgraded PTX Model 1 and 2 universal pan/tilt heads controlled from DMX or Visca devices.

Decentrix, on the Microsoft stand (SL6710), is highlighting its BIAnalytix Mediabase analytics system, debuting a new option that delivers a complete set of interactive analytical tools.

AZilPix (SU9817) is making its NAB debut with Axon Digital Design, introducing the US market to its Studio.One camera system for multi-angle and live 360 video production.

The Zao-S is a miniature mobile encoder being showcased by Soliton Systems (SU4910). Weighing 400g, and about the size of an iPhone, it provides live video streaming with H.265 encoding over 3G or 4G mobile networks.

Teamcast (SU6505) is showing Vortex II, a dual-cast ATSC1.0/ATSC3.0 exciter to help broadcasters prepare for the deployment of the ATSC3.0 DTV system. Also on show are the Tyger High Throughput Satellite Modulator, offering rates up to 480 Mbaud, and a complete solution for the DVB-CID standardised key feature.

Masstech (SU3202) is launching a disaster recovery option for playout environments. If primary playout operations are disrupted, it provides a fully automated content replication and playout platform for a secondary site.

Highlighted on the Magewell (SU12813) stand are 4K models in the Pro Capture family of PCIe video capture cards. Five 4K models offer a flexible choice of input interfaces including HDMI, SDI or DVI, and support resolutions up to 4096 x 2160. Select models also support 4K at 60fps. Also debuting are the USB Capture Plus family of devices.

Globecast (SU11106CM) is launching its Optim.Net for peer-assisted media delivery. The CDN offl oading service relies on the audience watching the content to participate in the delivery to other viewers.

Globecast will also be highlighting its US disaster recovery services, content localisation and monetisation, and its VODlogistics offering.

Vimond Media Solutions (SU10105CM) is launching Live Channel Planner, which is for scheduling and monitoring several live channels. It covers both linear live set-up and event-based live programmes such as sport. It is said to improve efficiency and reduce the potential for errors.

Ross is also introducing a new pan/tilt head – the VR100 – to its robotic camera systems for virtual studio tasks and v7.0 of its XPression motion graphics systems, adding support for Microsoft Windows 10 and IP.

Evertz (N1503) will be demonstrating two new components of its IP-based Dreamcatcher live production system. DC-Live-Edit is a video/audio editing tool with instant craft editing capabilities and render-free publishing. The DC-MG media gateway makes use of unused processing capacity to complete jobs at high speed and transcodes content in a matter of moments.

Evertz is also showing products that include 12G-SDI routing, distribution, conversion and HDR/SDR conversion, as well as advancements in cloud-based playout in the Mediator-X and OvertureRT Live VM systems.

Tedial (N1420) is debuting Evolution Augmented Storage (AST), which can handle any multimedia content regardless of its physical location and facilitates media operations across multiple sites.

Tedial is also introducing Multiverse, a tight integration between Pebble Broadcast Systems’ Marina Automation and its own Evolution MAM.

TMD (N6227) is launching bolt-ons for the Mediaflex-UMS architecture for software-defined workflow management.

Starfish (N5924) is launching a US operation and focusing on transport stream processing products such as TS Splicer.

The new MX-32 is being added to the Apantac (N5906) series of multi viewers, making it possible to monitor up to 32 independent video (3G/HD/SD-SDI) inputs simultaneously with four independent outputs.

Hitachi Kokusai (C4309) is showcasing the Z-HD5500 HDTV studio and field production camera, which aims to address the challenges of shooting in venues with low-cost or varying frequency LED lighting. The camera supports HLG and PQ HDR specifications.

Sony is also showcasing a number of products for live IP production workflows, including camcorders that can stream from the field directly to the TV station or the cloud for playback or editing. 4K live production camera systems for sports with Share Play operation and Slow Motion Replay are on show, as is the Media Backbone Hive content production platform.

Also new is the VidOvation VidOlink Reacher 1500, which supports the wireless transmission of HDMI, HD SDI, tally and two-way intercoms up to 1,500 feet.

VR is the focus for Timecode Systems (C2746) as it unveils how its SyncBac Pro and Blink Hub app can be combined to offer timecode synchronisation for GoPro cameras in VR rigs, treating multiple GoPro cameras in a rig as one.

Taking centre stage on the Leader Instruments (C9021) stand is the newly enhanced LV5490 multiscreen waveform monitor. A new HDR option enables the LV5490 to measure both 4K and HD HDR in all the competing protocols, while new five-bar display capabilities provide simultaneous display of maximum and minimum luminance, component and composite levels, and gamut errors.