The economic downturn and Setanta’s demise should have been bad news for the OB sector in 2009, but long-term sports contracts are cause for optimism, writes Andy Stout. 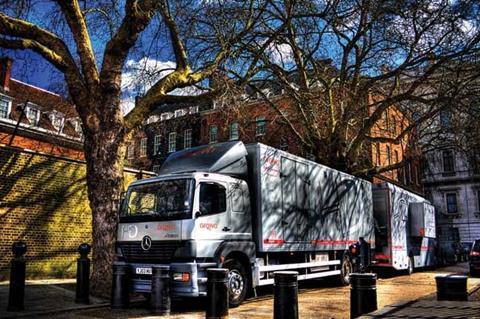 Arena Television managing director Richard Yeowart sums up 2009 in a handful of words. “It’s been an odd year,” he says.

Indeed, for the OB sector it’s been a profoundly odd year, both literally and metaphorically. Literally, because received wisdom has it that those years that end in odd numbers are tough for OB, as the big sporting events - the Summer Olympics and the World Cup - tend to cluster around the even numbers. And metaphorically because, despite everything, business doesn’t seem to have been too bad for most.

“We lost Setanta’s custom, but we have more work now than we had before its demise,” continues Yeowart. “In fact, year on year, we have seen turnover grow by about 18% which is quite healthy in the current market.”

Inevitably, the picture is a fuzzy one. To an extent, OB is insulated from the vagaries of the market by the bulk of its business coming from long-term contracts and those contracts in turn being based on sport. “Sport is always there, it just doesn’t go away,” says CTV managing director Barry Johnstone. “As a result, it’s been a good year. We haven’t suffered dramatically from a business downturn.”

However, insulation from the chill winds in a sector where margins have traditionally been low isn’t absolute. “On jobs, we’ll find people looking at the last camera and the latest bit of kit and asking, ‘Is that really necessary?’. There are nips and tucks all the time, but the core of it remains the same,” comments Mick Bass, managing director of Arqiva Outside Broadcast.

The other company to suffer most from the demise of Setanta, of course, was O21, and that has now been swallowed up by SIS LIVE. “OB prices remain under significant pressure, and very few OB companies make strong financial returns,” said SIS LIVE’s head of commercial outside broadcasts Phil Aspden before news of the takeover broke. “It seems unlikely that the market can support the number of companies still operating in it, and further market consolidation seems inevitable.”

Competition remains unsurprisingly fierce as a result. Contract renewals have become more fraught as broadcasters look to shave percentages, with some significant contracts moving company (see timeline, below). Competition around margins for the one-off events - entertainment and occasional sport - has become even more cut-throat, too. “The dreaded 25% saving has been used to batter rates to levels where we have turned down some jobs,” says Omni TV head Tony Cahalane.

SEPTEMBER
According to estimates by Harris, there are at least 100 modern SD OB trucks ripe for upgrading to HD in Europe EVS demonstrates a live HD 3D replay and slow-motion system at IBC using its XT[2]-LSM unit. But the show’s OB section is estimated to be down by 10%-15%

Volume is the key to keeping heads above the water and trucks on the road, and increasingly this year that volume has been in HD, which finally seems to be counting for the majority of the work out there.

The modern HD truck is now HD, 3G, mainly tapeless and 5.1, with IP-based routing (although the 3Gbps capability is more for future-proofing than any actual current demand). Size varies: small, flexible units have their place when it comes to access, but sport in particular is the domain of the double and triple-expanding leviathans, with large, flexible production areas and good lines of sight.

These units cost serious amounts of money, which is a problem given that the arrival of HD has already truncated the expected 10-year lifespan of many SD trucks (ROI, according to one OB head, is now pegged at five years for cameras and seven for the trucks).

One way for companies to save costs is to refurbish trucks rather than building them from scratch. Neil Wilson of Neil Wilson Enterprises says his company has refurbished three trucks this year. Not only does it save costs - an HD refurb costs under £1m excluding EVS machines and camera chains - but it also means that the unit is off the road for only two to three weeks. “If you have a 10-year-old vehicle that’s SD and there’s nothing wrong with it, then the economics make sense,” he says.

The mood across the industry as 2010 approaches is an optimistic one. Yeowart forecasts 24% growth and talks of putting two new trucks on the road. Aspden says it will be a “strong” year and Cahalane talks of “a big increase in enquiries”.

Given the amount of big, global sporting events, 2010 is set to be the year of the modular, rack-mounted flypack. “As always in an even year, the flyaway market is a big one,” says Presteigne Charter chief executive Mike Ransome, who has multiple systems going out to the Winter Olympics and the World Cup. “They tend to be much bigger installations than you’d get in a truck - you’re not going to get 350 monitors in a video wall and on the road very easily, after all.”

Will 2010 also be the year of 3D? The announcement that Telegenic is building its first dedicated vehicle for 3D production certainly points to it having a considerable impact. “Up until now we’ve just been using an existing HD truck and bolting on the bits we need such as 3D monitors,” says unit manager Eamonn Curtin.

However, while there’s enough connectivity in the modern HD truck to tie left and right-eye channels together without much modification, the way that people work in them is different, requiring a slightly rejigged internal layout. “Feedback that we’re getting is that you need one extra person per camera pair to monitor the incoming signal, with stereographers sitting behind them,” says Ian Davis, Sony project manager, OB Unit.

Expectation is that the extra manning requirement will disappear as the productions gain more experience in the field, but there is more expense to come. “You wouldn’t want to produce 2D and 3D from the same vehicle,” says Davis, citing different cutting requirements among other reasons. How the industry and the business models handle that cost implication could well be one of the main stories of 2010.

OB facilities for I’m a Celebrity…

With flypacks set to become steadily more important to an industry now competing in a global marketplace, Gearhouse Broadcast’s support for ITV reality show I’m A Celebrity… Get Me Out Of Here! showcases just what is possible.

Together with Camera Corps, the company has supplied just shy of 70 cameras for the production, along with two vision mixers for the production gallery, two EVS XT[2] servers, 13 DigiBeta VTRs, Calrec and Yamaha audio desks and a range of other kit, which is set up in Portakabins on the site. It is a massive undertaking that sees Gearhouse provide 15 technical crew 21 days before the shoot starts and who remain on site until a week after the show ends.

And the secret to keeping it all working in such difficult conditions? “Never switch it off,” says technical director Simon Atkinson. “Once the cameras go into camp we never turn them off, so 24/7 power is required early on. This prevents damp and condensation getting into them.”