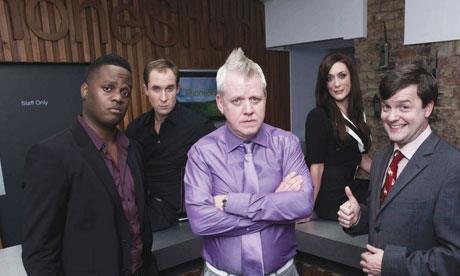 We live in a country of identikit high streets. Walk down any one and you’re met with more or less the same set of familiar retail faces: JD Sports, the looters’ favourite; Starbucks and Costa, the mums-with-buggies favourites; Phones 4u and Carphone Warehouse, this writer’s favourites; and Greggs, the snarky gag writer’s favourite. And, of course, the hustling armada of brightly tabarded street jesters with clipboards who charmingly bully you for your bank details: nobody’s favourite.

A few years ago, it struck me that we’ve never really had a sitcom (or a drama, for that matter) set in the heart of this modern British high street. In fact, we barely reference this very real and recognisable universe in the sitcom worlds we create.

There might be fleeting asides to shops and brands, but it’s generally a quick quip from the outside looking in and they often never go deeper than having a dig at Greggs.

It seemed odd to me that for somewhere where we as a nation spend so much time and money, there are very few fictional narratives set around it.

So PhoneShop was borne out of a desire to reflect this real world. And where better to focus than on somewhere that all of us have a very real experience of?

I guarantee that at some point, most of us have walked out of one of these places with a phone we didn’t want or an airtime plan we didn’t understand. We’ve crossed over into this digital frontier and been locked into a 24-month, gimp-mask contract by a sharply dressed lad with a fat watch, John Terry hair and pointed shoes.

I wanted to explore this world, this thriving ecosystem where phone salesmen see themselves as the top of the retail tree. If you’re at a party, who are you more likely to want to sleep with: the guy who can get you a quid off a pair of slippers from George at Asda, or the guy who’s going to hook you up with the new iPhone? This isn’t a line from the show by the way, it’s a quote from our research.

PhoneShop is a single-camera show with multi-camera sensibilities. I wanted to load it with gags in the way that you would an audience show, and to plot it carefully and intricately.

And while the high street is a big part of the show – we shoot in a real shop on a real South London high street – I didn’t want it to be overpowering.

I wanted it to be a true sitcom in terms of its familial structure, but also to nod to the fact that the world we sit in will always be part of and in tune with the broader retail ecosystem.

I’ve long been a firm believer that the shows we make should reflect the lives of the people who watch them rather than the people who make them, and I’d really like to think that we’ve managed to do that with PhoneShop.

If you’ve a minute spare, do a quick PhoneShop search on Twitter and see what real people think about our world…