Portrait Artist of the Year; Urban Myths; Henry VIII: Rise of a Tyrant 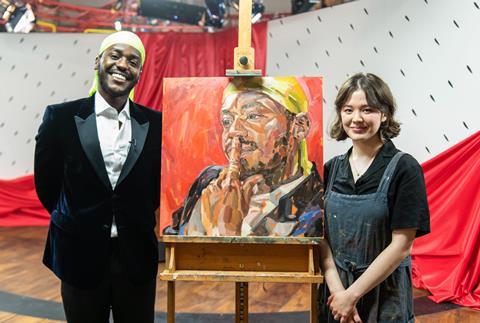 “While I believe there is some kind of saying about the levels of excitement involved in watching paint dry, this is gripping from initial sketch to finished product. Often, the ‘professional’ spinoffs of shows such as Bake Off or MasterChef bring a more cut-throat and vicious spirit of both competition and judging, but this is so far from it that it’s practically an hour-long cuddle.”
Rebecca Nicholson, The Guardian

“While retaining a commendable sense of proportion it is absorbing enough to make you temporarily forget about the world beyond the walls of Battersea Arts Centre, where it is set. Nothing could undermine the show’s soothing quality; watching people quietly stroke paint on to canvas is, it turns out, quite the tonic for our times.”
Gwendolyn Smith, The i

“Joan Rivers was a human gag-machine, as Sue Perkins’s fizzy, nimble script showed from the first seconds. It was a brilliant Katherine Ryan as Rivers who was the engine of this Urban Myths, stealing every scene and the actor you were always watching.”
Carol Midgley, The Times

“The playlets are too short to be engrossing or even always memorable, but they’re fun. Katherine Ryan was a hoot as Joan, flinging one-liners like darts. But it was Jessica Barden, who used to play Kayleigh in Coronation Street, that commanded the screen as the emerging superstar.”
Christopher Stevens, Daily Mail

“There wasn’t a great deal that we hadn’t heard before, but it was well done and the thing about Henry VIII is that he might have been an absolute bastard, but he’s never boring.”
Carol Midgley, The Times

“This was a decent primer for those coming to Tudor history for the first time. We were told about Henry’s relationship with Cardinal Wolsey but very little about Catherine of Aragon and the marriage that occurred during the years covered here. Presumably, that is because the wives were dealt with in an earlier series. But it meant some of the juicy bits were left out, in favour of putting Henry on the couch.”
Anita Singh, The Telegraph