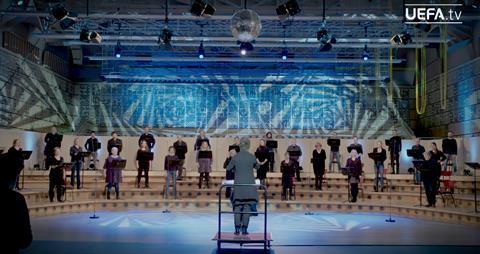 MassiveMusic has created a distinctive anthem for the UEFA Women’s Champions League.

It marks the start of the 2021/22 season, which adds a group stage to the tournament, and the prize money has also been quadrupled. The Women’s Champions League has also unveiled an updated logo and brand identity.

The anthem created by MassiveMusic is designed to “capture the hearts and minds of players and fans all over the world, taking the already iconic UEFA brand to the next level,” says the company.

UEFA’s brief for the anthem was “classic yet modern, combining emotion and power, whilst also being iconically memorable.”

MassiveMusic used coronation anthems as well as classical music pieces for inspiration, and from this research discovered the most effective anthems are composed in Baroque timing with complex arrangements, counterpoints and harmonies.

Lodewijk Pöttker, executive creative producer at MassiveMusic, said: “For the UEFA Women’s Champions League we wanted to create a bold and progressive anthem, capturing the innate prestige and excellence inherently associated with the Champions League. Turning the vocal melody into a classical choir as well as a fan chant meant we created something for both players and fans to really connect with.

“We formed a women-led creative committee to provide feedback on sound composition throughout the creative process, ensuring the piece conveys an empowering message for women.”

Nadine Kessler, UEFA’s chief of women’s football, added: “People need to know the UEFA Women’s Champions League, they need to have something they can relate to and be attached to and I believe such an anthem is really important for a recognisable competition.”

MassiveMusic: About the sonic strategy

Merging this knowledge with contemporary inspiration resulted in a composition that encapsulates the journey of the players from the tunnel to the pitch. Firstly, with the walk-on fan chant as the players enter the pitch with fans cheering them on, followed by an epic full orchestral piece building up in a crescendo as the players are lined up.

Featuring UEFA’s three official languages, English, German and French, the anthem contains phrases to convey the perfect message to give an extra confidence boost to the players and fans before the whistle blows. “All unite, Das große Spiel (the biggest game), The time is now, C’est maintenant (it’s now), They stand, With pride.” Aided by this new anthem, UEFA has brought a new identity to the women’s game, at the genesis of a new era of women’s football.

The Groot OmroepKoor choir recording, led by female conductor Martina Batič, expresses the majesty, energy and power of the best women’s club competition in the world, conveying an empowering message of strength and courage for women, aiming to change perceptions and celebrate their skill.

The addition of a new anthem and branding is just the latest stage of an overhaul of UEFA women’s football, in line with UEFA’s Time for Action strategy, which aims to double the reach and value of UEFA flagship women’s competitions by 2024.