As Sky prepares to launch its in-home stereo 3D channel, Will Strauss talks to director of product development Brian Lenz and chief engineer Chris Johns about how they got here and where they go next. 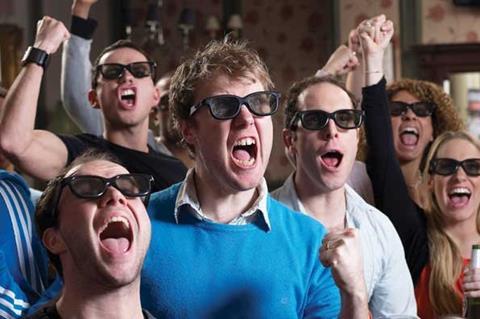 Can you recall the moment when you realised stereo 3D to the home was a possibility?

Chris Johns “It was NAB 2008 and two things came together. 3ality were doing a presentation of a live studio feed from LA to Vegas via satellite on the big screen. It was a whole day of 3D sessions. I happened to be sitting by this smaller Hyundai TV set. It wasn’t switched on for the entire morning. Then five minutes into the live content, the smaller screen switches itself on. And I realised that here was possibly a way of putting 3D over satellite. And it all gelled together.”

The first trial was the Ricky Hatton fight in May 2008. What was the reaction?

CJ “We got 3ality over to do it. It was fantastic success. We brought it back, showed the exec and within a few months we’d been able to put it over our own platform. The exec had the same response that everybody has when they first see 3D.”

Brian Lenz “When we started out, the first discussions were around building a special computer to do a one-off using commercial bandwidth. We just said, let’s do whatever it takes. Then very quickly we went from just ‘having a go’ to realising that we could do 3D without changing our boxes. As soon as we realised that we knew that we had something.”

Did you have to do much persuading?

BL “3D has pulled us through. We’ve never had to sell it. We’ve just had to get the people in to a room to look at it. The overwhelming majority love what they see. It’s not everyone but there is a significant group.”

Would things have been different if you couldn’t do 3D over your current infrastructure and set-top boxes?

BL “We would not be here launching today if we’d had to introduce new boxes. We’d still be sitting saying we’ll wait and see. 3D would not be happening right now if we couldn’t do a frame-compatible HD format that could go out to the Sky + HD box because we couldn’t make the business model work. If we had to do anything in the infrastructure, to swap out or change the transmission or change the chip-sets and start reselling boxes we wouldn’t be here at all.”

CJ “It goes all the way back into the production. Especially in the economic environment as it was then. If we had had to re-build an entire playout, edit system, post system it wouldn’t be economically viable.”

But you’ve still had to spend some money?

BL “The investment to take 3D to market is less because there is no infrastructure investment. We’ve made investment in trucks and production equipment but that is primarily around the economics of the availability of kit and that it’s cheaper for us to buy it right now than it is to hire. It’s all marginal costs in the creation of content. It’s a luxury place to be in because of the investment we’d already made.”

Technology allows for constant improvement and evolution. If you can’t upgrade the infrastructure and boxes, what can you do to ensure you’re constantly pumping out the best possible images?

BL “The quality is going to come in the capture. That is where the variability is. Then there is also high variability across display screens. The two places where you will see the benefit will be in the range of better cameras and rigs and more consistently high quality in TV displays before you have to worry about the signal side. We’ve proved that if you have a clean high-quality crisp image, you put it side-by-side and put it over the HD infrastructure to a great monitor or TV it is crystal clear.”

CJ “The thing to remember is that we don’t squeeze it into the transmission format until the last possible point. You start off with the highest possible quality and you work your way through the system. All the way through you have two separate images, two individual HD images which are the same quality as our 2D images. It’s only when we create that final transmission HD master when we know that we’re not going to manipulate or fiddle with it anymore that we compress it. We also did a serious of tests to check the best compression method to make sure we are doing the optimum one to the screens available in the marketplace.”

To what degree will you look to improve things?

CJ “Every little piece of improvement you can make is worth investigating. We ask can we get a few extra pixels at the point of encoding to transmission? Every bit counts.”

Are there further stereo 3D innovations that you want to see?

BL “The two places we want to see the most development is in our ability to go to longer lenses. We’re not using anything more than 22s. Getting to those longer lenses, to be able to shoot from further away, that’d be interesting. As well as getting higher quality from smaller rigs. I’d like to see the rigs get more and more compact.”

CJ “The bigger challenge is not technical but about how you join the pictures together. Technically we know how to do it but it’s how the operators start to do it. That’s what creates the bad 3D. The pictures are perfectly good but it’s how you show it to the brain. If you can show it to the brain in the way that the brain expects, it makes all the difference. If you take each eye individually perfectly good pictures but glue them together in the wrong way you end up with a sticky mess.”

BL “That’s the biggest challenge. When it’s wrong, it’s really wrong. Most people can see out-of-focus. There are a lot of people who don’t realise what they’re doing. It’s the whole education thing and knowing whether they’re pushing the boundaries too far.”

What about shooting techniques, how have they evolved, especially with football coverage which has presented several challenges?

CJ “When we started it was mid season so our camera positions were very high up. We’ve lowered everything right down now. That’s the one major change. We’re getting to the right camera positions.”

BL “In HD coverage, you’re on Camera 1 for the virtually the whole thing because that is the habit of the way they cover. We’ve had to get everybody comfortable with going away from that. Directors need to get to that comfort zone where they’re confident that if they go off Camera 1 that they’re not gong to make the heretical mistake of missing the action. There’s that trust factor.”

What do you make of the new type of single body stereo 3D camcorder?

CJ “It’s limited. It has its place. Because there are certain fixed elements to it they can be used but they have to be used with care. You don’t have the range.”

BL “It’s a nice pro-sumer product. It has its place. There are going to be others but people are always constrained by the side of the lens.”

2D to 3D conversion has caused plenty of controversy. What’s your current position?

BL “It’s generally poor. It’s a shortcut. If what you’re goal is to create 3D content really quickly you can do a 2D to 3D conversion of any length of content. If you’re goal is create something that’s good and that has used 3D to help tell the story you will fail doing it that way. We use 2D to 3D conversion on some shots. But you can only push it so far. We’re very strongly against it as a de facto accepted. We do review it on a case-by-case basis. It can be done well. The problem is that it takes money and time to do it well. 2D to 3D content will not play a prominent role [on the 3D channel]. It’ll only feature on the films that have made an appropriate investment in it. ”

Virgin has launched a 3D movie channel but most other broadcasters are biding their time. Do you expect others to follow your lead?

CJ “I’d ask why are the others not doing it? There’s no reason people can’t do it. The only constraint is bandwidth availability. If they had the same bandwidth we have, they’d probably do it.”

BL “It’s the technology limitation but it’s also the business model limitation. We’re a pay-TV operator, we make premium products and we sell them at a price so we can monetise 3D. The people who are negative about 3D are often those that haven’t found their place yet. It’s always easier to throw stones from the sidelines. That’s just frustration on their part.”

Sky launches its in-home 3D channel on 1 October. It will feature sport, movies, arts and documentaries and be compatible with 3D TVs being introduced by LG, Sony, Samsung, and Panasonic, and both ‘active’ and ‘passive’ 3D formats.