Special Recognition: Have I Got News For You

Have I Got News For You is TV’s most popular satirical news format… allegedly. 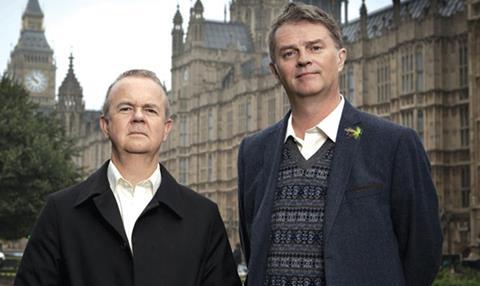 Have I Got News For You

Hat Trick Productions for BBC One

Have I Got News For You is TV’s most popular satirical news format… allegedly.

What is certain is that Hat Trick Productions’ format has expertly skewered the powerful and pompous for 50 series – spearheaded for 25 years by team captains Private Eye editor Ian Hislop and, in all but one series, surrealist comedian Paul Merton.

Overcoming the downfall of one-time host Angus Deayton in 2002, the format continued on an arguably stronger footing with a slew of guest hosts, from comedians Alexander Armstrong and Jo Brand to Jeremy Clarkson (pictured), Anne Robinson and Alistair Campbell, plus curveballs like Brian Blessed and William Shatner – not all of whom were made to feel entirely comfortable.

It also provided the springboard for London mayor Boris Johnson to turbocharge his political career, while other brave politicians, including Lembit Opik, Alan Johnson and Charles Kennedy, made memorable appearances – along with a tub of lard, a last-minute replacement for Roy Hattersley.

Against its famously low-budget set and props – including the Wheel of News, the One-Armed Bandit of News and the Strengthometer of News – the format has remained reassuringly familiar, while somehow striking the right tone on many of the complex and upsetting news stories that have come its way, from 9/11 to phone hacking, the Jimmy Savile revelations and the Charlie Hebdo massacre.

Each week, viewers are treated to the picture quiz, the odd-one-out round and the missing word competition – offering national exposure for guest publications from Modern Ferret to Potato Storage International and Poultry World.

The show has entertained viewers of up to 7 million following its move from BBC2 to BBC1 in 2002 and, despite the acceleration of rolling news and the rapid responses of social media, it shows no signs of slowing down.

Here’s to the next 25 years… Goodnight.