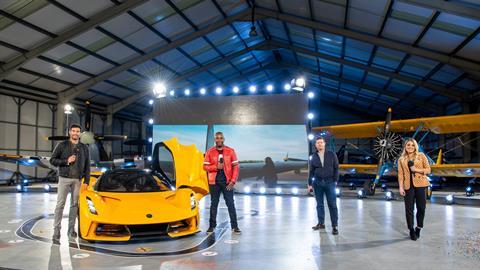 When the Goodwood Motor Circuit was forced to cancel races in 2020 due to the pandemic, an ambitious three-day event was planned to showcase the exhilaration of live motorsport to viewers in lockdown around the world.

Aurora Media Worldwide had just 12 weeks to plan this one-off celebration and the result was Goodwood SpeedWeek – a unique blend of technical innovation, creative storytelling, fan engagement and production ingenuity.

Coverage was streamed live from October 16 to 18, with two daily eight-hour streams combining racing action with entertainment and lifestyle content. Audience interaction was conducted via an app, social media and Goodwood’s website.

Aurora re-imagined how motor-racing is shot, with live drones following vehicles in a way never seen before on a circuit. Three galleries were operated simultaneously, with coverage delivered by dozens of cameras, connected by 12 miles of high-speed fibre.

The event reached a global audience of 54 million across 150 countries – an impressive 83% uplift on Goodwood’s Festival of Speed in 2019.

“This lockdown event was an incredible success and proves that necessity is the mother of invention,” said one judge. “Aurora fused the new with the old to present Goodwood in a progressive way. It was an absolute triumph.”

Formula 1: Drive To Survive
Box to Box Films for Netflix