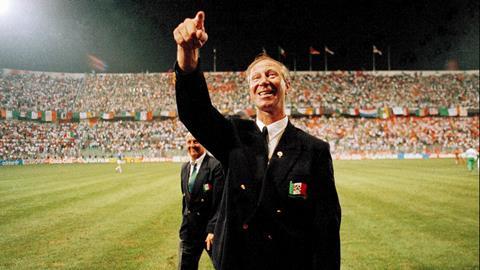 Noah Media’s Finding Jack Charlton wins the Editor’s Choice prize for its touching, poignant portrayal of Charlton’s previously undocumented life with dementia, while looking back at his career, in particular as the much-loved manager of the Republic of Ireland national team. Charlton was Ireland manager from 1986 to 1996, during which time he took the side, which had never qualified for a major tournament before, to a World Cup quarter-final.

Directed by Gabriel Clarke (Bobby Robson: More Than A Manager; Steve McQueen: The Man & Le Mans) and Pete Thomas (Adam Hills: Take His Legs), and shot on location in Ireland and England, the film provides an intimate insight into the man, including magnificent contributions from his family, including his wife Pat and son John, alongside celebrated Irish players, musicians, writers and politicians.

The film also covers the strained relationship between Jack and his brother Bobby.

A chance conversation towards the end of filming led to the production team stumbling across a stash of Charlton’s hand-written notes, which soon became invaluable to the narrative of the documentary. At the same time, tireless research and trips to Melbourne and Boston resulted in the team uncovering unseen archive footage that also became crucial to the film.

Around the middle of the documentary, there is a brilliant piece of archive footage, shot at the Irish team’s hotel after they were knocked out of the Italia ’90 World Cup. During it, Charlton leads a sing-along of Blaydon Races.

Jack died during the making of the film, and the documentary ends with him listening to Blaydon Races, singing along to the lines he can still remember.

The film is beautifully made and received universal praise on its release last year. It’s a documentary that sets a new benchmark in high-quality factual sports content and will be held in the highest esteem for years to come.