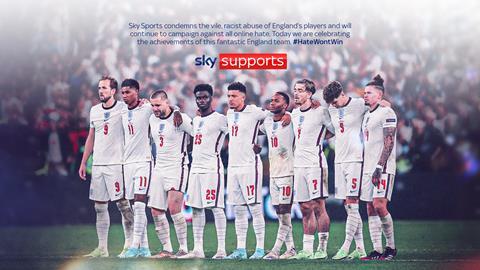 ‘It is a campaign that will reach a massive audience with a clear, captivating and moving message’

Sky Sports’ social media campaign against online hate was the culmination of years of rising abuse and bigotry it had been witnessing across the internet.

It launched the campaign to its 45 million followers with an emotive video featuring its presenters and reporters detailing the personal and abhorrent nature of abuse they receive online. It also launched measures to make safe the places where their content is enjoyed by sports fans, but where hate had been present.

Sky Sports then joined forces with BBC Sport to co-produce a video to highlight that sport is a place for rivalry but also unification, with the message ‘Hate Won’t Win’.

Most recently, the campaign demonstrated support for the players who suffered abuse following the Euro 2020 final, as well as Formula 1 driver Lewis Hamilton.

“A powerful social media campaign about an important social media issue,” commented one judge. “It revealed the shocking things people say behind the cloak of social media,” said another. “It is a campaign that will reach a massive audience with a clear, captivating and moving message.”

Where We Belong
Burnley Football Club