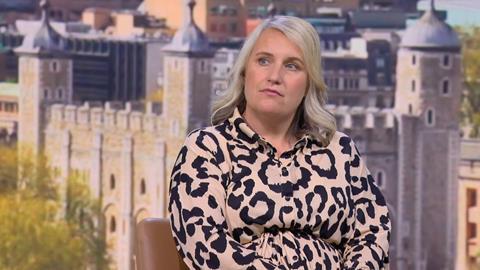 Pundit of the Year: Emma Hayes

Our judges were unanimous in their decision to award Emma Hayes the trophy for Pundit of the Year.

The manager of Chelsea FC Women was a newcomer to punditry in a major championship when she joined ITV’s Euro 2020 team. But just as Hayes has scored success with her team, she triumphed as a pundit.

Hayes would arrive at ITV’s Euro 2020 studio armed with a dossier on each team she would be watching that day. It was obvious to the production team that her thorough approach would be the same as when she is coaching – leaning on the analysis tools she uses each day to interpret what she is seeing on the pitch.

This tactical knowledge, combined with communication skills honed over a career in management, helped her relay this information to viewers in a way that was easy to understand.

Hayes fast became a key part of ITV’s coverage during the month-long tournament, alongside established names such as Ian Wright, Roy Keane and Gary Neville.

“Emma offered a unique, managers’ view that was confident and unapologetic, with insightful analysis,” said one judge. “Passionate and knowledgeable, Hayes was a role model for young girls and women aspiring to work in the football industry,” said another.

Alan Shearer
Match Of The Day for BBC Sport

Micah Richards
Match Of The Day for BBC Sport