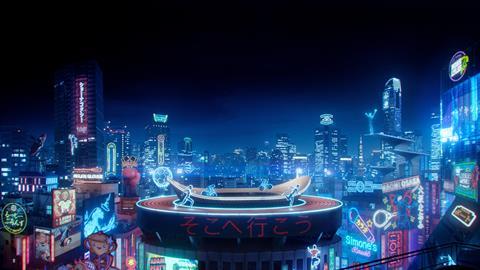 Sports Commercial of the Year: Tokyo 2020 - Let’s Go There

‘The film is incredibly creative, with brilliant attention to detail. It’s a joy to watch’

The BBC introduced its Tokyo Olympics coverage with a brilliantly creative 60-second film, Let’s Go There, that merged different styles and approaches into a visual spectacle, transporting the viewer to the heart of the city.

The film was produced by Nexus Studios and aired across BBC1, BBC iPlayer and BBC Sport social media for the duration of the Games.

The creative brief was for the film to never stop moving, and that vision was achieved with a continuous camera move that passes through, over, into and around the host city.

The level of detail throughout the spot is incredible – from the streets of Akihabara, where every sign relates in some way to an Olympics event or athlete, to a kiosk selling only merchandise inspired by 13-year-old skateboarder Sky Brown.

The film morphs into a J-Pop music video, where the song and choreography are an ode to gymnast Simone Biles, before moving to an arcade game featuring a face-off between sprinters Dina Asher-Smith and Shelly-Ann Fraser-Pryce.

One judge said: “You can tell that every shot and frame has been carefully considered. It is an extremely engaging piece that delivers a sense of authenticity with its production.” Another said: “The film is incredibly creative and entertaining, with brilliant attention to detail. It’s a joy to watch.”