Picture and audio post on 26 x 15-minute Cbeebies in which viewers are encouraged to join in with the games and puzzles played by a family of animated robots. 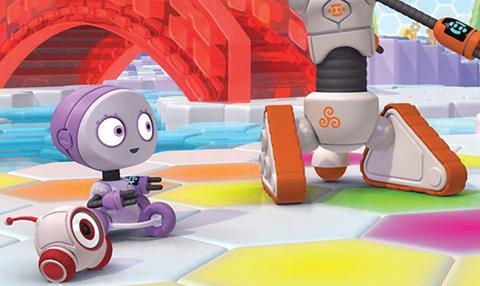 Brief Timeline has completed picture and audio post on 26 x 15-minute programmes, including grade and visual effects shots on 104 live-action sketches for the CBeebies series in which viewers are encouraged to join in with the games and puzzles played by a family of animated robots.

How it was done The show is an ambitious mix of animation and live action aimed at preschool children.

For another shot, flight paths were created within a 3D environment. This allowed for directional forces on the particles to be as realistic as possible. In total, the Timeline North team completed 10-12 sketches each week during post-production.

Animation was completed by Spider Eye in Cornwall.

Character voice recording for both animation and live action sequences was carried out at Timeline’s facilities in Soho, with remote video and audio links to the production team in Media City and the animation team in Penzance.

Voice editing for the animation was carried out by Spider Eye, and for the live action sequences at Timeline North.

Final compilation of the bespoke and generic elements was completed by Roberts in Avid.