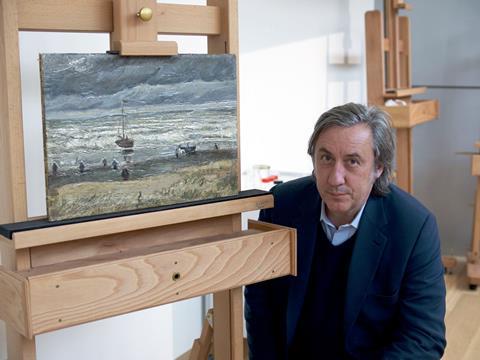 “It’s brilliant. A fascinating look at how stolen art is used as a black-market currency – canvas banknotes, basically – and how it can be used as a crook’s ultimate bargaining chip to reduce a sentence.”
Sam Wollaston, The Guardian

“Graham-Dixon was a mesmeric presenter not only because of his art expertise but also due to his hairstyle, which kept changing. Even more intriguing, though, was that someone managed to break into Amsterdam’s heavily alarmed Van Gogh Museum and steal two paintings in less than four minutes using just a rope and a sledgehammer.”
Carol Midgley, The Times

“The art historian is no stranger to playing slightly out of position. But Graham-Dixon unpacking the long story of a criminal investigation into the theft of two works from the Van Gogh Museum in Amsterdam called for tools he tends not to keep in his box. Much of his storytelling wouldn’t wash on a current affairs programme.”
Jasper Rees, The Telegraph

“In the course of his investigations, Graham-Dixon uncovered one explanation for the criminal interest in hot Van Goghs. I wasn’t sure I bought it, although I enjoyed the ride, populated by Dutch cat burglars with names like Ockie D, and a mysterious Mafioso known as Pinocchio.”
Matt Baylis, Daily Express

“Oh, dear. And it had been going so well for Girlfriends. Then last night we got a masterclass in ‘how to ruin a decent drama in one mad scene’. Did no one at any point whisper to Kay Mellor the words ‘overegg’ and ‘pudding’?”
Carol Midgley, The Times

“Girlfriends has now parted company with any scrap of credibility and is reeling around in all directions like a drunken hen party at three in the morning. All the viewer can do is give in, laugh and whoop along. Admit it — it’s fun.”
Christopher Stevens, Daily Mail

“To give ‘Pastor’ Mike Hallimore the oxygen of airtime was a dubious decision on the BBC’s part. The bile he spouted had to be challenged by a serious interviewer. Louis Theroux has proved he can handle bigots like that. Stacey Dooley has the courage to tackle them. Miriam was just throwing rocks at a hornet’s nest and running away.”
Christopher Stevens, Daily Mail

“Bravely, she allowed herself to empathise rather than patronise the people she met. More than Louis Theroux, she wasn’t scared to get angry and hold bigotry to account. The landscapes might not be as spectacular but we could do with a bit of Miriam’s insight closer to home, perhaps with less fart gags.”
Bernadette McNulty, The i