The First Men In The Moon

Pre-production and concept design, along with 312 VFX shots, for an adaptation of HG Wells’ tale. 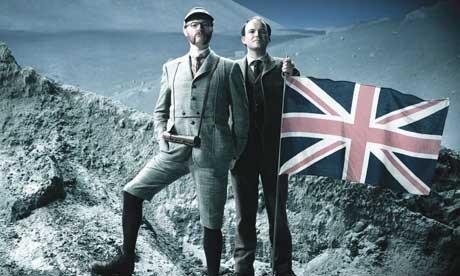 Client Can Do Productions

Brief Complete pre-production and concept design, along with 312 VFX shots, for an adaptation of HG Wells’ tale.

How it was done The Rushes team did pre-vis to determine set proportions and camera angles, provided concept art and completed matte painting on an 80x15 ft printed backing. Maya, Shake, Nuke and Renderman were used to
complete the effects work.

A key element of the VFX was the Selenite CG creatures that inhabit the Moon’s sub surface caverns. Supervising animators Andy Hargreaves and Craig Travis, having pre-visualised all key sequences, were then present on set for shooting all of the VFX elements to ensure as smooth a transition as possible to post. The duo, in conjunction with Technical Director Mark Pascoe, gave the Selenites a distinct insect like but appealing character in line with their role in Wells’ script.

‘The Sphere’ in which the two characters travel to the moon was handled by Seb Barker who took over the entire sequences single handed, including all animation and compositing.

Watch it 19 October on BBC4