“Petrolheads can rejoice. The BBC may wonder how Matt LeBlanc and whoever joins him next year can possibly compete.” 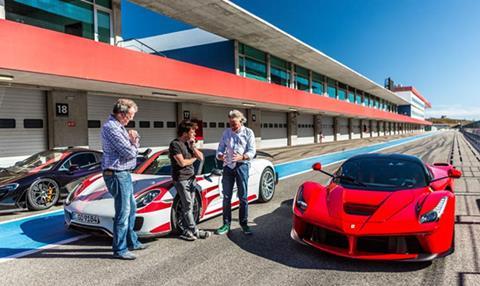 “We weren’t yet five minutes in and already Top Gear had been thoroughly trumped. Petrolheads can rejoice. The BBC may wonder how Matt LeBlanc and whoever joins him next year can possibly compete.”
Ed Power, The Telegraph

“You can pour something into a different container, but it still tastes the same. And, like it or not, this tastes of Clarkson, Hammond and May. Fans of old Top Gear are going to be happy.”
Sam Wollaston, The Guardian

“It was an interesting hour examining various forms of public disruption and if the modern version is slick and pointless, it’s at least nicer to look at than the old one, obligingly re-enacted by some left and right-wing dinosaurs who converged on Downing Street just after Brexit.”
Matt Baylis, Daily Express

“It is possible that I approached Bob and Roberta’s Excellent Protest Adventure in the wrong mood, in need of something no programme could deliver. But this uneven, underdeveloped, scattergun look at the phenomenon might have been quite an irritating hour in even the most cheerful of circumstances.”
Sam Wollaston, The Guardian

“He soon proved ill-equipped to explore this phenomenon. Indeed, he did not seem to know what phenomenon he was exploring: extra-parliamentary protest or its artistic expression. Had he concentrated on the latter, we might have got somewhere.”
Andrew Billen, The Times

“The plotting is nothing special. Fans of other ‘death-by-numbers’ shows such as Vera and DCI Banks will read every twist as if it’s laid out on a map. [But] this formulaic writing leaves more time for moody atmosphere, which is what noir is all about.”
Christopher Stevens, Daily Mail

“If you can get over a plot that remains as unconvincing as his accent, it was a good-enough way to while away 90 minutes.”
Sam Wollaston, The Guardian

“Young Darragh (Jack Monaghan) added an intriguing new dimension to Jack’s rainsodden, whiskey-stewed world. It remains to be seen whether he’ll be part of the furniture, passing-eye candy or, just like Columbo’s dog, a pointless prop.”
Matt Baylis, Daily Express