The Luminaries; My Brilliant Friend

‘It promises to be as addictive as it was in its original form. What is the televisual equivalent of a page-turner?’ 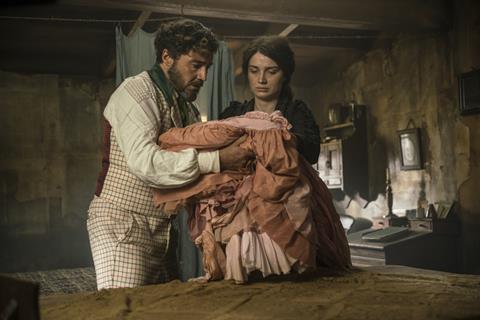 “Based on the Man Booker Prize- winning novel, author Eleanor Catton adapted her work for TV and made drastic changes from what was a complicated, 832-page oeuvre divided into 12 parts and centred around signs of the zodiac and celestial charts. If the plan was to make it easier to follow, then it failed. The mystery and mysticism that dominated the book had been chipped away but there was still too much unfathomable talk about ‘astral twins’ and ‘cosmic fingerprints’.”
Claudia Connell, Daily Mail

“This is a sort of murder mystery in a society full of grotesque racists and misogynists, and what we must work out is — do we care? If anything will make us, it is [Eve] Hewson’s fine performance and the promise that [Himesh] Patel will be in it a bit more soon. It looks as though Anna is being framed for murder, having been found in the wrong place at the wrong time with the wrong people — as one of the bigots delightfully put it, “in the middle of nowhere in the middle of the night, a politician, a savage and whore”. But why can’t she read and write? Why was Lydia’s husband dead? I suppose we may as well stick around to find out because there’s naff all else on.”
Carol Midgley, The Times

“It promises to be as addictive as it was in its original form. What is the televisual equivalent of a page-turner? A binge-watcher? That, anyway. Characters-with-a-capital-C everywhere, more plot than you know what to do with, hares set running at every turn, lavish period detail and lighting replicating the novel’s gorgeous staginess, and a convoluted murder-mystery. All set against the endlessly febrile atmosphere of the country’s 19th-century gold rush. Oh, also – opium, obstacle-strewn paths to true love, business double-dealing, racism, fortune-telling, brothels, questions of fate and astrolabes. It is glorious escapism, perfect for our times. It matters not at all, for once, that so much must be lost from a book in its translation to screen.”
Lucy Mangan, The Guardian

“Here we go again with one of the BBC’s dark dramas. I don’t mean tonally, although The Luminaries (BBC One) is a tale of murder and weirdness. I mean, literally, dark. Look, I know they didn’t have brilliant lighting in 19th-century New Zealand but help us out here, we can’t see a thing. And it’s not as if the rest of The Luminaries is particularly illuminating.”
Anita Singh, Telegraph

“This first episode felt like a prequel to a bigger story, introducing us to characters and hinting at themes of racism, sexism and greed. It’s a slow-burn so far, but I have a feeling our patience will be rewarded.”
Emily Baker, The i

“Most big television shows are gorgeous now, thanks to a combination of technical advancement, the seemingly bottomless pot of money and the fact that, since TV is now considered cinematic, dominated by Hollywood stars, it really needs to look the part. But even by those standards, My Brilliant Friend is an exceptionally gorgeous show. It takes its time when it needs to and zips through the parts where it does not need to linger. (I am ambivalent only about the depiction of a rape, which is part of the story, but the scene goes on too long, and seems unnecessarily cruel in its detail.) My Brilliant Friend is absorbing, gripping television that demands that you sink into it completely, closing off all distractions.”
Rebecca Nicholson, The Guardian