The Queen’s Green Planet; Give it a Year; Nightmare Pets SOS

“Much has been written about ‘slow television’, but you would struggle to find anything more soporifically relaxing than this. I mean that as a compliment” 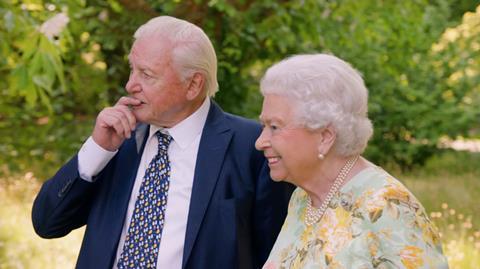 “Hot on the heels of her Coronation programme in January came this gem — the Queen walking around Buckingham Palace garden discussing trees, flowers and blackbirds with that other national treasure, David Attenborough. Much has been written about ‘slow television’, but you would struggle to find anything more soporifically relaxing than this. I mean that as a compliment.”
Carol Midgley, The Times

“The Queen’s Green Planet showcased the irreverent side of her personality more vividly than any previous TV programme. Perhaps, one week before her 92nd birthday, she doesn’t feel the need to be quite so boringly discreet. Or perhaps, more probably, this was a perfectly calculated ploy by a woman with a long lifetime’s experience of diplomacy, who was determined to find a way of highlighting a project that, while worthy, might not seem terribly exciting.”
Christopher Stevens, Daily Mail

“It is nice, a tiny split in her own slightly prickly husk for a glimpse of the conker within.”
Sam Wollaston, The Guardian

Give it a Year, ITV

“Give it a Year was jazzed up with Britain’s Got Talent-style shooting star graphics and copious close-ups of Karen Brady’s high heels, clip-clopping along purposefully. But she also showed a warmer, more supportive side to the uncompromising demeanour she displays next to Lord Sugar. The half-hour format, with snappily told stories, was diverting enough that my tea went cold while watching it.”
Michael Hogan, The Telegraph

“She really is rather good at this presenting lark — articulate, clever, wise and a combination of warm heart and cold fish. It’s not Dragons’ Den but it’s got potential.”
Carol Midgley, The Times

“Nightmare Pets SOS was taking liberties. A show under such a bloodcurdling banner should bring us killer gerbils roaming school corridors after being exposed to freak doses of radiation. We want to hear about man-eating goldfish, flushed down the loo as tiddlers and now prowling for vengeance through the waterways of an unsuspecting market town. What we got was a dog that didn’t like being taken for walks, and an incontinent cat.”
Christopher Stevens, Daily Mail

“In the 25 years since Waco there have been many documentaries on the subject, of varying quality. Overlooking the terrible pun in the title, Waco Inferno: The Untold Story made it to the higher end of the list.”
Matt Baylis, Daily Express