“The second series of The Real Marigold Hotel looks set to be another touching watch.” 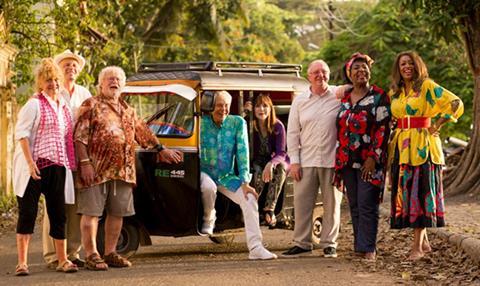 “The second series of The Real Marigold Hotel looks set to be another touching watch. The clear devotion that Paul Nicholas and Lionel Blair had to their wives at home was just one aspect that made episode one gently heartwarming.”
Daisy Wyatt, The i

“Watching the first of the new run was a bit like, I imagine, meeting your ex-wife and wondering what made you fall for her in the first. For its first 45 minutes, this episode was a travelogue: a holiday suggestion rather than a quest, unless it was Paul Nicholas’s for extra underpants.”
Andrew Bilen, The Times

“It’s just a bunch of Brits behaving badly abroad, saying the kind of things that make you wince when they come from the mouths of your own elderly relatives. Saying that, my seventysomething Indian parents absolutely love it.”
Chitra Ramaswamy, The Guardian

“The producers were eager to find another character like series one’s Miriam Margoyles, but short of hiring a dyspeptic hippo it can’t be done. They made do with ex-Goodie Bill Oddie, whose grumpiness is a bit of a facade.”
Christopher Stevens, Daily Mail

“Whether it is about being retired in India or being Bill Oddie retired in India, I’m not getting it. I have concluded this show is not really about anything and it doesn’t really do anything. It does nothing – but very entertainingly.”
Matt Baylis, Daily Express

“24: Legacy lacks its star turn, Kiefer Sutherland. This is not to say that his replacement, Corey Hawkins, is no good. He is watchable enough. It is more that Eric is pursued by bad guys through a plot peopled by clichés.”
Andrew Billen, The Times

“Watching this, one couldn’t help feeling that its Arabic-speaking-enemies-at-the-gate paranoia is now chiming particularly depressingly with Trump’s attempted keep-’em-out isolationism – you half expected to see his name pop up in the closing credits. But look past that and this was an undeniably rip-roaring start to the reboot.”
Mark Monahan. The Telegraph

“If this programme ever came up with real health benefits, instead of vague verdicts that owe more to common sense than medicine, it might be worth watching. Instead, all it does is leave us with a new batch of ailments to fret about each week.”
Christopher Stevens, Daily Mail

“The first of eight episodes is a spare, richly atmospheric, Scandi-noirish and largely incomprehensible affair. Not that I’m complaining; if I understood anything this early on, I would feel cheated.”
Chitra Ramaswamy, The Guardian