TV Critics: The Replacement; Catastrophe; Inside No 9

“This is the juiciest melodrama since Doctor Foster.” 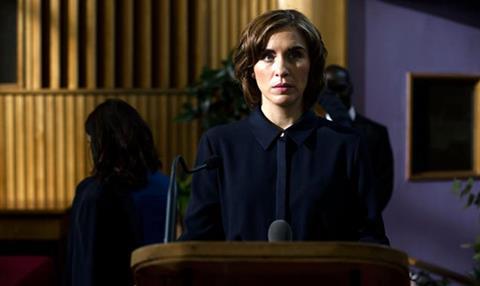 “It’s a joyously bonkers, highly psychological melodrama that starts with a foot in reality and then runs wild. It’s ridiculously addictive, though. Next Tuesday seems a long way off.”
Sam Wollaston, The Guardian

“Morven Christie is very good here, as are all the women, but as Paula, Vicky McClure is fantastic. This is the juiciest melodrama since Doctor Foster.”
Andrew Billen, The Times

“There’s nothing quite like an emotion-shredding potboiler to get the blood up on a chilly February night and BBC1’s new three-parter The Replacement proved just the ticket.”
Gerard O’Donovan, The Telegraph

“It’s all hugely enjoyable tosh, a cross between The Hand That Rocks The Cradle and Single white Female.”
Virginia Blackburn, Daily Express

“This new Glasgow-set drama from BBC1 takes the often difficult subject of balancing a hard fought career with having children, and spins it into a tense and highly watchable portrait of paranoia.”
Siobhan Smith, The i

“For lovers of cringe-making comedy, it really doesn’t get much better than Catastrophe. The good news is it shows no sign of getting any less funny despite the mood darkening considerably.”
Gerard O’Donovan, The Telegraph

“Catastrophe has evolved into the most realistic comedy on TV. At the same time, it is also the most inventively sexual and foul-mouthed. Watch it, but not when your children are in the room, whatever age they are.”
Christopher Stevens, Daily Mail

“It’s the brilliant thing about Catastrophe that, under a pile of knickers and all the filth, it is actually very sweet. Romantic, even. That and the fact that it is hilarious; the filth is top notch, glorious filth.”
Sam Wollaston, The Guardian

“Catastrophe remains the juiciest comedy since series two. Happily, Horgan and Delaney, who also write the scripts, have finally got round to giving Rob a marriage-threatening flaw of his own: the recovering alcoholic is back on the gin. I could not be happier to predict a bumpy five nights ahead.”
Andrew Billen, The Times

“As the third series kicks off, it’s clear that Catastrophe’s biting, barb-tastic writing is as strong as ever. This is a funny, honest, occasionally moving look into the lives of a couple who are rocky, but realistically so. Both Sharon Horgan and Rob Delaney are on top form.”
Rebecca Monks, The i

“A brilliant episode of Inside No 9. Not just because it was a creepy, twisting tale of revenge, based on the riddle of the Sphinx. But because it was also based on, and starred, yesterday’s Guardian cryptic crossword.”
Sam Wollaston, The Guardian

“Clever, compelling and very, very dark, Inside No 9’s latest standalone story defined ‘unpredictable’. It also proved you can make a gripping psychological thriller based on crossword puzzles. Who knew?”
Mark Butler, The i