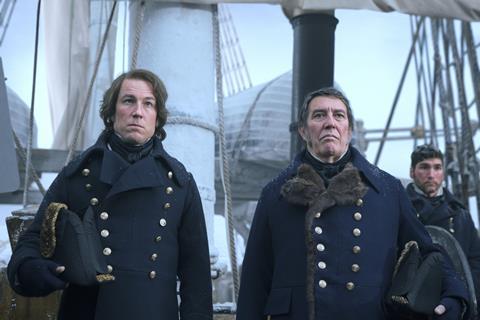 “Ridley Scott’s The Terror was a cut above your average survival horror show. Ciaran Hinds as the fêted 19th-century sea captain, and Jared Harris and Tobias Menzies as the ships’ commanders, helped to elevate this into classy psychological drama as the men’s hubristic optimism started to fade. These two opening episodes were, in truth, a tad slow, but don’t let that put you off. It gets better as the reality of being stuck fast in icy wilderness starts to hit and tensions mount.”
Carol Midgley, The Times

“It is a story ripe for drama, and The Terror tells it well. Ridley Scott is an executive producer and there’s a fine cast, led by Ciarán Hinds as Sir John Franklin and Jared Harris as Franklin’s second-in-command, Francis Crozier. The creeping sense of unease is excellently done. I mean it as a compliment when I say that I’m not sure I can stick it out for all 10 episodes, knowing what’s to come.”
Anita Singh, The Telegraph

“There were no jump scares and little gore. Yet the dread was at moments suffocating and bolstered by strong performances from Ciarán Hinds as the doomed Franklin and Jared Harris as his cautious yet ineffective second-in-command, Captain Francis Crozier. With eight episodes to go, the really disturbing part is knowing the true scares are yet to come.”
Ed Power, The i

“For all the talent on tap, it’s a curiously stage-y production, almost like a historical re-enactment for a documentary by Neil Oliver or Lucy Worsley. There’s a whiff of television-for-schools about the whole business. The actors barely move and the camera angles are static too. Much of the script appears to be lifted from journals and letters. Perhaps the intention was to create a sense of claustrophobia, but the result is that we never forget we are watching a play, set on a ship.”
Christopher Stevens, Daily Mail

Inside Chernobyl with Ben Fogle, Channel 5

“Although Fogle was indeed front and centre throughout, it was in a ballsy and fascinating way. This documentary was gripping and structured so that there were incrementally bigger ‘reveals’ as it progressed. Hats off to Fogle, standing inside the exploded No 4 reactor where the level of radiation is still so high he was limited to five minutes.”
Carol Midgley, The Times

“The haunting beauty of the forsaken countryside surrounding the Chernobyl nuclear power plant was one of many surprises in Inside Chernobyl with Ben Fogle. Other eye-openers in this fascinating film included the revelation that hundreds of foolhardy thrill seekers illegally enter the 1,000-square-mile exclusion zone in Ukraine every year. Fogle’s inquisitiveness was infectious, whether he was talking to a selfie-seeking trespasser or interviewing an old lady who had moved back to Chernobyl, having been forcibly evacuated in 1986.”
Ed Power, The i

“Despite the protestations of Andrews’s friends and an unconvincing contribution from her psychiatrist, the programme was heavily weighted in the CPS’s favour. If the documentary was trying to suggest this was another Sally Challen case, it did a poor job.”
Anita Singh, The Telegraph