“It’s brilliant, hilarious, the funniest thing since The Trip to Italy.” 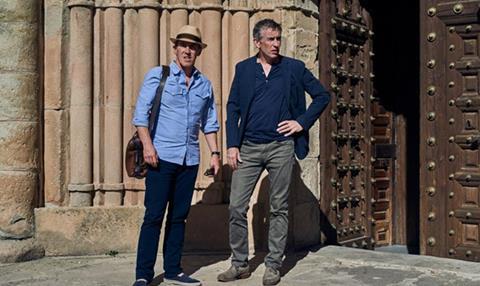 The Trip to Spain, Sky Atlantic

“The only shame about The Trip to Spain is that it’s now on Sky Atlantic, which you may not have. Otherwise, it’s brilliant, hilarious, the funniest thing since The Trip to Italy.”
Sam Wollaston, The Guardian

“A worrying proportion of viewers of Steve Coogan and Rob Brydon’s The Trip believe they are watching a botched culinary travelogue in which two gigantic egos obscure the scenery and the cooking. The rest of us see the two stars’ insecurities fictionalised into comedy and the perils of male friendship exposed through the best impressions you will see on television.”
Andrew Billen, The Times

“In this period of narratively intricate dramas, such as Line of Duty and Broadchurch, it was refreshing to meander, relax and enjoy the ride. No rug-pulling twists or complex plotting here. Just two men talking and occasionally stopping for some lunch.”
Michael Hogan, The Telegraph

“Following on from their northern England and Italian jaunts, this latest version is essentially more of the same. But that is no bad thing. The two comedians, and director Michael Winterbottom, keenly understand what people like about the show.”
Mark Butler, The i

Alone With The In-Laws, BBC2

“As pre-marriage guidance, the programme worked a treat. As television, it was distinctly unsatisfying.”
Andrew Billen, The Times

“Minor misgivings about the exercise aside, it certainly works as television. Sixty minutes of OM effing G.”
Sam Wollaston, The Guardian

“I can easily see this one-off episode being rolled out into a full series.”
Michael Hogan, The Telegraph

“Much of the enjoyment of this programme lay in psychoanalysing the young couple and reading their thoughts. We were being invited to guess whether their relationship would survive, and it would have been much better if the episode could have ended at the altar, with the pageantry of their wedding.”
Christopher Stevens, Daily Mail

“Alone With The In-laws takes the exquisite torture of the situation and turns it into a TV show, under the pretence of helping people to make sensible choices. It seemed to dissolve Chris and Stacey’s wobbles, although I wondered why they were having them – and so publicly – just before a very big wedding.”
Matt Baylis, Daily Express

“This experiment provided no insights and told us nothing we couldn’t have guessed. It was TV at its shallowest.”
Christopher Stevens, Daily Mail