TV Critics: The Trouble with Dad; The Halcyon; How To Survive The End Of The World

“It was incredibly touching in places and occasionally sad, but what it was throughout was very, very funny.” 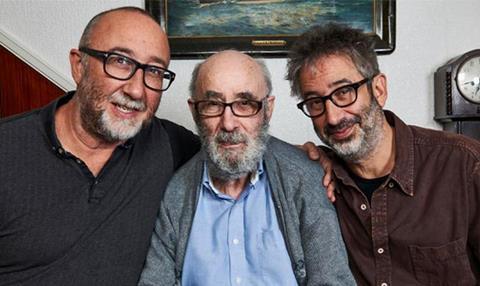 The Trouble with Dad, Channel 4

“There are enough soul-bearing misery memoirs out there; this weirdly uplifting film celebrated family dysfunction, albeit awkwardly, and was all the better for it.”
Gabriel Tate, The Telegraph

“It was incredibly touching in places and occasionally sad, but what it was throughout was very, very funny. The Trouble With Dad was like an unconventional love letter to a difficult man and one many people caring for elderly relatives would identify with.”
Claudia Connell, Daily Mail

“Unlike some other films about dementia, this wasn’t a film that left you crushed with sadness. It was too full of the Baddiel brothers’ pragmatic humour.”
James Jackson, The Times

“This brutal, brave, awkwardly personal film is more than just about raising Pick’s awareness. The joking with his brothers, and with Colin, is important, because it is very funny, as well as awful and very sad.”
Sam Wollaston, The Guardian

“I’m sure The Trouble With Dad did no end of good, publicity-wise for David Baddiel’s current stage show. That is not to say it did not do some good too. It seemed from the rave reviews and the rush of public responses that many people find laughing their way through this subject liberating.”
Matt Baylis, Daily Express

“The film did focus more on Baddiel than dementia at times, but the comedian’s insight helped to make it an honest story of the love lost between fathers and sons – a timeless theme that transcends illness and is made all the sadder because of it.”
Daisy Wyatt, The i

“It’s easy to knock the wartime saga, but you can’t say it hasn’t thrown everything but the hotel’s kitchen-sink into its bid to entertain the hell out of us. But will we meet again? Being fun is one thing, unconvincing another— that’s been a frustration for a show loaded with such tantalising potential.”
James Jackson, The Times

“The Halcyon was complete hokum, with reheated plots aplenty and suspension of disbelief compulsory. But with a cast this good, none of it mattered too much.”
Gabriel Tate, The Telegraph

Jon Richardson: How To Survive The End Of The World, Channel 4

“A programme that should have been funny, but was an unfocused shambles. It should have been called Jon Richardson: How To Pad Out A Three-Minute Stand-up Sketch Into One Hour Of TV.”
Claudia Connell, Daily Mail