TV Critics: An Adventure in Space and Time; Him & Her; Young Doctor’s Notebook; Animal Odd Couples

“This period piece crackled with the affection of a true fan.” Read on for the verdict on last night’s TV. 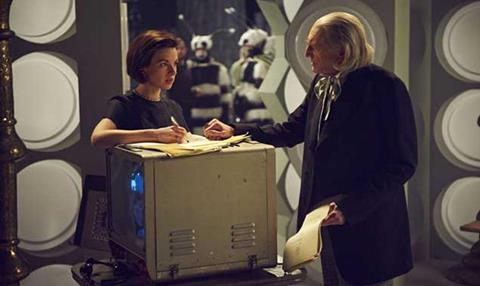 An Adventure in Space and Time, BBC2

“Gatiss’s script, slow at first but accelerating all the time, had a little fun with time travel, framing the drama as a flashback from the end of [William] Hartnell’s reign.. Gatiss is a Doctor Who writer and a Whovian, but this was not a genesis story told by an anorak. It took Doctor Who as a symptom of a Britain that was changing.”
Andrew Billen, The Times

“It was in part a Sixties-set workplace drama, like Mad Men or The Hour, in which an ambitious young woman banged her perfectly coiffed beehive against the era’s glass ceiling. That woman was the producer Verity Lambert and for casual Doctor Who fans such as myself, the show’s progressive employment record was a revelation.”
Ellen E Jones, The Independent

“Wonderfully written and beautifully realised, this period piece crackled with the affection of a true fan. A warm glow radiated from the screen and bathed the viewer in TV magic. Bravo. Now for Saturday’s main event.”
Michael Hogan, Daily Telegraph

“Undoubtedly enjoyed by Doctor Who devotees, An Adventure In Space And Time was also terrific viewing for us non sci-fi fans, too.”
Claudia Connell, Daily Mail

“It’s brilliant – hilarious and real, rude and touching (there’s even rude touching) at the same time. It will strike a chord with anyone who’s ever had a relationship, of any kind, ever.”
Sam Wollaston, The Guardian

“I still find them hard to take, but this series…looks like a masterclass in naturalistic comedy.”
Andrew Billen, The Times

“The writing, comic timing and characters were all spot on. The sheer hell and awkwardness of what happens when two families with absolutely nothing in common get together for a wedding was brilliantly captured.”
Claudia Connell, Daily Mail

“It’s no surprise that this YouTube-aping nature documentary got made, but how did they manage to stretch content usually found in a 30-second clip over two, hour-long programmes?”
Ellen E Jones, The Independent

“Although I’m sure it made millions of people go ‘ahh’, it all felt flat and cobbled together — like a YouTube video stretched out over an hour.”
Claudia Connell, Daily Mail

“This series feels stagey and slightly self-indulgent, perhaps more of an actors’ project than one for viewers. The characters are too selfish to root for and too cartoonish to believe in. It’s a comedy-drama that’s not quite comedic or dramatic enough. You can’t help feeling it wouldn’t have been commissioned, let alone recommissioned, without the involvement of Radcliffe and Hamm.”
Michael Hogan, Daily Telegraph