TV Critics: Back in Time for the Weekend; Obsessed By My Body; The Secret Life of the Zoo

“Back in Time for the Weekend was your average, squeaky-clean educational BBC2 show, but with a bit of fun thrown in to boot.” 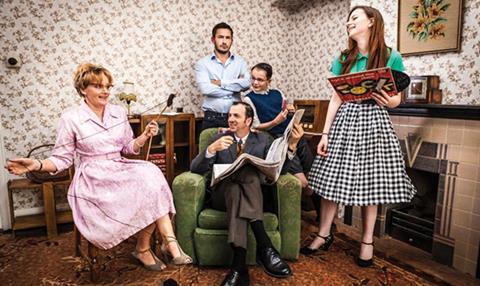 Back in Time for the Weekend, BBC2

“Back in Time for the Weekend was your average, squeaky-clean educational BBC2 show, but with a bit of fun thrown in to boot. I am relieved not to be chained to the sink, although the thought of meeting someone at a dance instead of on Tinder does seem rather charming.”
Daisy Wyatt, The Independent

“This six-part series has a clever double appeal. For younger viewers, there’s the fun of seeing a very 21st-century family-of-four survive without TV or internet. For older viewers, the real joy of the series is its nostalgic appeal. But you didn’t have to remember the Fifties to think how satisfying that life looked.”
Christopher Stevens, Daily Mail

“By suggesting that kitchens were full of people standing for the national anthem and that church attendance was all but compulsory, the producers poked the radical Ashby-Hawkins with sticks intended to make them squeal. Cameos by Ann Widdecombe as a Sunday school teacher and Angela Rippon as an equally strict dance instructor provided further evidence that this (still good) series is coarsening.”
Andrew Billen, The Times

“The Ashby Hawkins family were excellent – game, and funny about everything they have to do. But maybe the whole Back in Time For … thing is being stretched a little thin. What next? Back in Time for the Holidays: pack the Ashby Hawkins off to Skeggy, then a Costa? Actually, that would probably work.”
Sam Wollaston, The Guardian

“The beauty of the previous series was that food was just the portal, the entry-point to exploring the whole package of bygone family life. It did that well. Too well to need repeating.”
Matt Baylis, Daily Express

Obsessed By My Body, Channel 4

“Obsessed with My Body followed tales of bulked-up boys and steroid use, but had more to say about how social media affects the vicious cycle of our looks-dominated culture. It often seems Millennials shamelessly promote themselves online without any afterthought. But Obsessed with My Body showed the levels of doubt young people must overcome daily to become ‘internet famous’.”
Daisy Wyatt, The Independent

“The documentary could have been touching but with its silly music, repeated summaries and montages of other self-obsessives, it was undemandingly aimed at the post-pub viewer channel surfing for an easy laugh.”
Andrew Billen, The Times

“If today’s young blades are spending more time in gyms, more money on moisturisers and facials, then it probably seems striking only to people who formed their view of the world in the Nineties.”
Matt Baylis, Daily Express

“I’m inspired, by Duncan and Cosmo and Junaid, I’m going to beef up, tan up, make like a crab and watch as my confidence rockets. I’ll probably inspire others too, by doing one of these transformational videos; I’ll point at the camera a lot and maybe I’ll change my name.”
Sam Wollaston, The Guardian

“The Secret Life of the Zoo worked too hard to point out the similarities between the animals and the human race – as if the programme-makers wanted us to believe that we were watching the animal version of Big Brother. Nevertheless, the programme contained some fantastic footage and a few - too few – moments to rival the best of nature documentaries.”
Chris Bennion, The Telegraph

“Most of the hour was taken up with an elephant in labour. If, like me, you have to squint through your fingers during the business bits of Call The Midwife, then hidden camera footage through a night-vision lens of an elephant having a baby is far too much.”
Christopher Stevens, Daily Mail

“Shocking news in The Secret Life of the Zoo: meerkats aren’t the gorgeous little darlings you thought they were. In fact, such is Kirsten and her colleagues’ indifference to them, that the matriarch meerkat mum of so many babies hasn’t even been given a name; she’s just got a microchip. Time to rethink meerkats, maybe? And visit a new price comparison website?”
Sam Wollaston, The Guardian