“It was the most original drama (or comedy) of the year.” 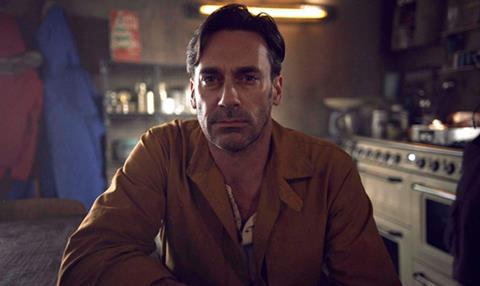 “It’s typical – and typically brilliant- Black Mirror. Brooker takes something that’s already here, like blocking, and pushes it forward in time. Not too far though, more of a nudge than a shove, so that his dystopia isn’t outrageous, it’s plausible, and all the more terrifying for it. Less sci-fi, more like now after a couple of software updates.”
Sam Wollaston, The Guardian

“Hamm and Spall are very different actors, charm vs. integrity, but they worked brilliantly against each other here. Even they, however, were surpassed by the cleverness of Charlie Brooker’s script. It was the most original drama (or comedy) of the year.”
Andrew Billen, The Times

“Black Mirror is great on our technology culture, but also just great; well cast, expertly structured and genuinely unsettling. At a time of year when schmaltz usually covers the TV schedules like a snowdrift, this sideling look at the state of humanity is all more welcome.”
Ellen E Jones, The Independent

“Over eight episodes, the tone was monotonous. One question was asked most repeatedly: what to do when your children disappear from you? Four fathers beside Tony had children who were in some way unavailable to them. The Missing was so busy making these melancholy connections it found it hard to ramp up the tension or believe its moments of violence.”
Andrew Billen, The Times

“Watching the highly anticipated finale, I mostly felt that sinking feeling you get when a book or series you’ve loved goes wrong in the final stretch. In the end an otherwise excellent series failed to deliver the one thing this viewer wanted most from the ending – a heartfelt, convincing sense of closure.”
Gerard O’Donovan, The Telegraph

“A week later than Jamie Oliver’s festive special, and a sign perhaps that TV bosses might be easing down on celebrity cookshows, came The Great British Bake Off Christmas Masterclass. Despite the reference in the title, this was no competition, unless you count Mary Berry and Paul Holywood’s few awkward attempts at banter and innuendo.”
Matt Baylis, The Daily Express

“It’s all the same isn’t it? And without the fun and the puns of Mel’n’Sue, or the excitement, and eliminations, of a competition. So that by the end of an hour I’m feeling not just sick and fat, but bored as well. Thankfully the show stopper Kransekake does, finally, stop the show.”
Sam Wollaston, The Guaradian

“The appealing thing about Malone is that he is a star by virtue of making other people shine. He’s a great teacher but not one who gets in the way of the pupils. In fact he often seems uncomfortable with any attention that is unrelated to quatrains, octaves and eight part harmonies. The hidden magic of the act, however, is that when Malone does look excited, when he does hop up and down and holler with appreciation, you know that his choir has earned it and that he really means it.”
Matt Baylis, The Daily Express

“”’Choirmaster Gareth Malone is back!’ announced the voiceover – a valiant attempt to introduce a sense of occasion, but in vain. It’s been barely six weeks since Malone was last on telly in The Choir’s Children in Need special.”
Ellen E Jones, The Independent