“A solid narrator with an eye for a good line and a nice way with a haunting image.” 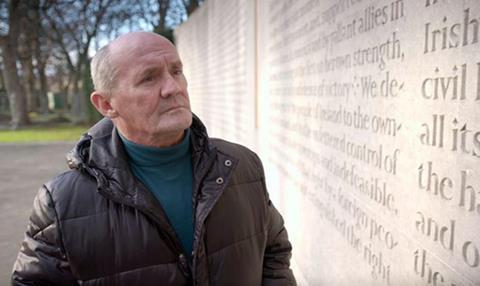 “The centenary of the Easter Rising next week will no doubt be marked by many articles, columns and programmes but few will be more heartfelt than Brendan O’Carroll’s retelling of his family history … Away from the drag and broad jokes he proved a solid narrator with an eye for a good line and a nice way with a haunting image.”
Sarah Hughes, The Independent

“Thorough, involving and fascinating…and the family thing, the uncles, adds humanness, poignancy, and a lovely link to now.”
Sam Wollaston, The Guardian

“You can’t blame a showman for showing off but his second clamber up the family tree demonstrated a thoughtful side … O’Carroll’s account was about as fair as any has given. He clearly felt pride in his uncles’ stand but he was also disarmingly straight about the things the Rising had and hadn’t achieved.”
Matt Baylis, Daily Express

“If his retelling was marked by one thing it was even-handedness … If I may summarise O’Carroll’s position, he admired the republican ends but would never have willed the means. Less satisfactory was the balance between absurdity and tragedy.”
Andrew Billen, The Times

“This was an account that never rose above the level of history as anecdote … As virtually the only high-profile effort by BBC TV to mark one of the key historical moments of the last century, it represents a shameful missed opportunity.”
Gerard O’Donovan, The Telegraph

“It made for fascinating viewing in the way watching an obsession in full flight always does.”
Sarah Hughes, The Independent

“Lots to ponder and worry about …  the quest by some for eternal life. Where will everyone go, if no one ever dies? That’s what I want to know.”
Sam Wollaston, The Guardian

“A film whose chief purpose was to illustrate just how far science still is from achieving anything of the sort … At its best, this Horizon approached the philosophical.”
Gerard O’Donovan, The Telegraph

“A parade of fantasists, charlatans, nerds and plain weirdos outlined their plans to live for ever, which ranged from the creepy to the murderous … To distract viewers from how unrealistic and fetid it all was, the scientists and their labs were filmed in soft focus, with blurred backlights and beams of blue lasers, through prisms, distorted lenses and cloudy reflections. It was, quite literally, smoke and mirrors.”
Christopher Stevens, Daily Mail