“The first of this three-part returning comedy certainly had its very funny moments, but was it really necessary?” 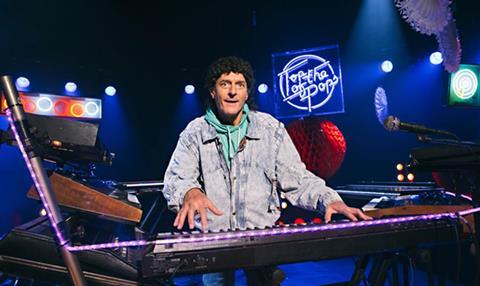 “The observational material had bite but lost its cutting edge by forcing itself into a sitcom framework. It tried to introduce one of those pesky “plot” things, with Pern arrested by the Yewtree-like “Operation Bad Apples”, while Burke cut all of Thotch’s music out of the musical.”
Michael Hogan, Telegraph

“Brian Pern does not exist, but if he did his humiliation would have been complete when the last follicle fell from his once voluminous mop. The first of this three-part returning comedy certainly had its very funny moments, but was it really necessary?”
Andrew Billen, The Times

“Like an amusing child, though, there was a point when it went too far. They made a sly dig at BBC4 biopics, then, continuing the BBC theme, a high-profile police raid was conducted on Brian in the name of Operation Bad Apples. There’s a sense of the BBC laughing at itself so other people don’t have to. I’m not sure it should get off that lightly.”
Matt Baylis, Express

“In its broadcast form, [BBC3] is a channel capable not just of Snog, Marry, Avoid?, but also last night’s extraordinary film, which turned footage taken in combat by soldiers, and in one case a doctor, into a war movie, an elegy and a cry for justice for those who have returned damaged and redundant.”
Andrew Billen, The Times

“This was exemplary documentary film making. It was so candid it seemed to tell us about not only Afghanistan, but also what the front line must have been like for First World War soldiers – certainly more so than much of the dedicated centenary programming”
Ellen E Jones, Independent

The Secrets of Quantum Physics, BBC4

“Professor Jim Al Khalili is a great physicist and communicator who has in his time hooked me with subjects as diverse as chemistry, outer space and Islamic science. I followed him this time into the smallest particles of matter with an open mind and great willingness. I lasted about five minutes.”
Matt Baylis, The Express