“It’s only in programmes like these that television really does justice to our duty of remembrance.” 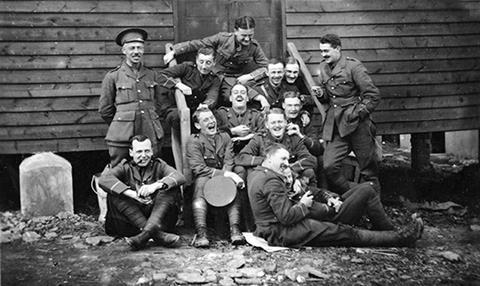 Brothers in Arms: the Pals of World War One, ITV

“In this year of centenary programming, we’ve seen big-budget costume dramas, Paxman-fronted documentaries and live-broadcast ceremonies, but it’s only in programmes like these, which include personal testimonies, that television really does justice to our duty of remembrance.”
Ellen E Jones, The Independent

“It was simultaneously hypnotic and humbling to see the years fall away behind the eyes of these men in their late nineties and older.”
Gerard O’Donovan, The Telegraph

“The interviews were intercut with World War I newsreels, expertly restored, that illustrated what the men described — but their voices and their emotions were all we needed to keep us spellbound.”
Christopher Stevens, Daily Mail

“While the component parts of this patchwork of eyewitness experience were compelling and unique, Great War Diaries fell short on the one thing it should have delivered – real emotion. A case, perhaps, of too many broadcasters spoiling the broth.”
Gerard O’Donovan, The Telegraph

“Poor sound quality on dialogue has been a repeated failing in BBC productions this year. It was valuable to see the war from the perspective of children, nurses and munitions workers. But like so many recent BBC programmes, this one was best watched with the subtitles on.”
Christopher Stevens, Daily Mail

“As a reminder of how terrible the war was, this was an intelligent story thoughtfully told.”
Virginia Blackburn, Daily Express

“A refreshingly simple, Bragg-to-basics hour of television. Who needs elaborate CGI recreations or fancy graphics when you can film a nice field in England?”
Richard Vine, The Guardian

“Bragg’s challenge was not to keep our attention, but to stoke our admiration for Ball. He was aided in this task by plenty of Gregorian chanting, sweeping aerial shots of rural Essex, and most of all by his obvious affinity with the 14th-century cleric.”
Ellen E Jones, The Independent

“A very enjoyable show. A sort of televisual equivalent of Bragg’s Radio 4 programme In Our Time.”
Virginia Blackburn, Daily Express

The Singer Takes it All, Channel 4

“Like a good karaoke night, The Singer is chaotic fun, and many elements do work. Watching the contestants audition in bedrooms, on office chairs or wearing their dads’ jerseys brings to the telly the nosey pleasures of YouTube.”
Andrew Billen, The Times