TV Critics: Bull; The Apprentice; The Face of Britain by Simon Schama 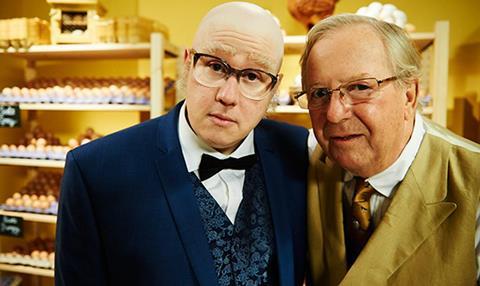 “A dusty antique shop setting, terrestrial stars from days gone by and canned laughter are not qualities that scream ‘watch me’. Bull, a new sitcom in the old-fashioned sense of the genre, had all three. Yet its very watchable principal characters and surreal edge, though occasionally tipping into confusing territory, left me wanting more. For Bull not to be left on the shelf gathering dust like one of Beverley’s knick knacks, we need material that will make us remember its stars.”
Sally Newall, The Independent

“Bull is a new sitcom commissioned by a channel that mostly shows old sitcoms, and it has the look and feel of something from yesteryear. Suffice to say that everyone who appears in Bull is wasted in it. Robert Lindsay plays Rupert Bull, the teak-stained owner of an antiques shop presided over by his chain-smoking sister (Maureen Lipman). You can imagine the trouble that might cause in an antiques shop. But if you are imagining the hilarious consequences, you have done more work than the writers.”
Tim Dowling, The Guardian

“The tough task to crack at UKTV’s Gold channel is scripted comedy. The group’s senior commissioning editor, Simon Lupton, has recently described the challenges of creating ‘modern mainstream’, and last night’s new entrant Bull is a case in point. The trouble is that it’s uneven, feels forced and will be far too cartoony for many palates. Especially too cartoony for a 10pm weeknight slot. The search for modern mainstream goes on.”
Alex Hardy, The Times

“So we’re used to the Apprentice candidates talking bullsh*t, but actual steaming manure made an appearance this week, brilliantly. Yes, cow poo was one of the items on the annual discount-buying task list, where the teams have to secure a range of incongruous items within a day, for the lowest price possible. While the show’s format feels about as lively as a taxidermy sloth on this eleventh run, this annual car crash is one of the highlights for me - and this proved no different.”
Sally Newall, The Independent

“Does anyone watch The Apprentice? I mean watch-watch it? During the second episode last Thursday, I did the following. Made some soup. Googled “electric blankets”. Passingly wondered, during the show’s shampoo-ad task, why the boy’s billboard model had so much foam on his face. Which is to say, about one in six minutes fully grabbed my attention. After ten years on screen, it’s become TV wallpaper: for background purposes and with a precisely repeated pattern.”
Alex Hardy, The Times

The Face of Britain by Simon Schama, BBC2

“The Face of Britain by Simon Schama continues to be one of the best things on TV; it can certainly claim to be without peer on Wednesdays. Last night, Schama dealt with the portraiture of love. Schama ended the episode with a moving but clear-eyed look at the famous photograph of John Lennon and Yoko Ono taken by Annie Leibovitz hours before Lennon was murdered. If it took someone of Schama’s brashness to conclude a history of romantic portraiture with a Rolling Stone magazine cover, it took someone of his skill to carry it off.”
Tim Dowling, The Guardian

“‘Don’t go. Don’t change. Stay with me.’ So began Simon Schama in the penultimate episode of The Face of Britain, his history of British portraiture. This shameless appeal was unnecessary: Schama the Charmer was at his best, quietly provocative, unpredictable, educative, at times effervescent. Of course we were going to stay with him.”
Benji Wilson. The Telegraph

Land of the Midnight Sun, ITV

“In the second instalment of Land of the Midnight Sun, Alexander Armstrong continued his journey through the frozen north. This particular segment of the Arctic Circle took him as far as Greenland. Armstrong is, of course, the embodiment of affability, whether he is dancing with Inuits or accompanying Danish soldiers on their 26-month sled dog patrol across a snowy expanse of nowhere. He treats everyone he meets as if they have just had a really good round on Pointless. And Greenland is one of those places I’m really glad I watched a programme about, instead of accidentally going to.”
Tim Dowling, The Guardian