TV Critics: Burgled; Poaching Wars; The Railway; The Men Who Made Us Thin; Monster Moves

“It seemed mostly about ogling deeply troubled people.” Read on for the verdict on last night’s TV. 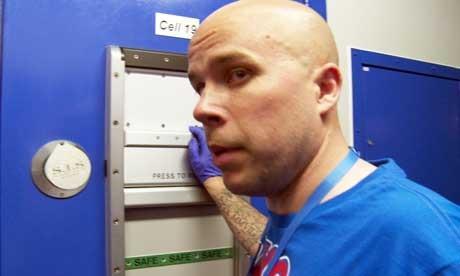 “The documentary adopted Cops-style filming, following police officers on duty as they attempted to catch thiefs. This led us to believe that we were in for some fast-paced, real-life action. We weren’t… The only insight offered was that student homes are an easy target, something we could probably have worked out for ourselves.”
Laura Davis, The Independent

“I had hopes for Burgled. It was a documentary about how a British home is burgled every 47 seconds, but came on like a new buddy cop show.”
Stuart Jeffries, The Guardian

“The kindly, compassionate officers, and director-producer Christopher Amess, got their one success story that made the effort worth it, as one young man spoke with relief about going straight. Overall, though, the problem seemed as difficult to chip away at as obesity.”
Alex Hardy, The Times

“No one actually coughed up any statistics to prove that all this [effort] was working. We had, instead, a couple of interviews with likely lads who said they were going straight and certainly seemed to mean it. Nevertheless, we were left with the impression that there are things that can be done and that, in some places, the police are actively interested in doing them.”
Matt Baylis, Daily Express

“On occasion we were given a glimpse into the circumstances and background of these men, and this did bring forth a level of empathy… But on the whole, these young men had little to commend them. Ultimately, this programme told us little we didn’t already know; it seemed mostly about ogling deeply troubled people.”
Jake Wallis Simons, The Telegraph

“This could have been a serious programme about the plight of elephants and rhinoceros facing extinction through sustained and brutal poaching. Instead, we saw Tom Hardy pretending to be a soldier, and making a pillock of himself. Which, admittedly, was entertaining in its own way. But it wasn’t quite the point.”
Jake Wallis Simons, The Telegraph

“The true power in this documentary came not from what Hardy said or any emotions he displayed but simply from the images of the main subject. Footage of elephant herds and watering rhinos contrasted sharply, upsettingly so, with hacked carcasses left to rot on the plains by poaching gangs. No single image or speech could sum up the human greed better than the clumsy, hurried butchery of these animals.”
Matt Baylis, Daily Express

“The problem with our rail network isn’t the rolling stock, ticket pricing structures or track. It’s you. If you stayed home, trains would be tickety boo. So, at least, I now believe, having watched The Railway: First Great Western.”
Stuart Jeffries, The Guardian

“Jacques Peretti’s case was that we need to change the entire food environment. Congratulations to him and to series producer/director Mike Radford, not only for fitting so much in, but for securing such an expansive travel budget to make such an expansive argument.”
Alex Hardy, The Times

“This is the first of a series in which trains, houses and ideally my mattress are moved through corridors so small you wonder how they got there in the first place. I would say C5’s commissioning editors need to be taken out and shot if this is the best they can manage, but I don’t want to put the kibosh on that all-important mattress move.”
Stuart Jeffries, The Guardian