“So this is what The Walking Dead would be like if it had a sillier sense of humour and British TV budget.” 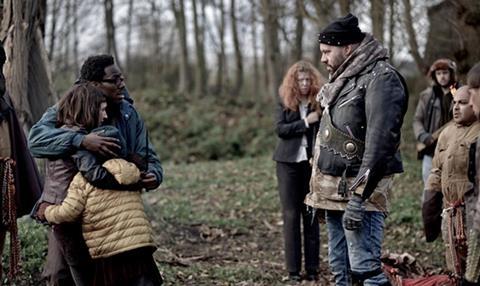 “What do you get if you reimagine Cormac McCarthy’s The Road for an Inbetweeners audience? With a hint of Lord of the Flies and Nathan Barley perhaps. Cockroaches, that’s what. Oddly, it kind of works. Very silly, obviously. But funny.”
Sam Wollaston, The Guardian

“So this is what The Walking Dead would be like if it had a sillier sense of humour and British TV budget. There weren’t any explosions or zombie hordes in Cockroaches but the script kept us entertained anyway by pondering the many “what ifs” of life after civilisation.”
Ellen E Jones, The Independent

If you suddenly learned the world was about to end and had sex with the nearest person to you, how awkward would it be if you both survived? Tom (Daniel Lawrence Taylor) and Suze (Esther Smith), pushing a shopping trolley through the post-Armageddon wastes of Essex nine years on, had gone a long way beyond awkward. Barely on speaking terms, they had stuck together for the sake of Laura, the result of their fateful union, and because there was no one else to talk to anyway. All of which was fairly entertaining, if never quite laugh-out-loud enough.
Gerard O’Donovan, The Telegraph

“What will survive of us, Philip Larkin never wrote, is cockroaches. Cockroaches is a post-nuclear apocalypse drama; Survivors played for humour. Different, in a good way: black but not bleak.”
Andrew Billen, The Times

“Every episode begins with a collection of murder suspects, switching them round like a conjuror doing the three cups trick. It’s shot fly-on-the-wall style, with CCTV footage and hand-held video. But the real innovation is in the script. There isn’t one. The cast are given a plotline, then make up the dialogue as they go along. This is low-budget, bare-bones drama, but more than watchable.”
Christopher Stevens, Daily Mail

“Respect is maybe not something you often associate with Channel 5, but they deserve a load of it for Suspects. The detective drama, back for a third series, clearly doesn’t have much of a budget. Improvisation doesn’t always work – it’s a proper skill, probably harder to pull off convincingly than regurgitating a script convincingly – but here it does. They speak like actual people, even actual police officers maybe. Budget-schmudget, I’m involved.”
Sam Wollaston, The Guardian

“No disappointments at the return of Suspects. There’s some real old-school craftsmanship in this show, which uses nothing more than three coppers, clever cases and the odd on-foot chase to conjure up screen magic. It’s a show that knows its audience but more than that, a show that stays true to its name.”
Matt Baylis, Daily Express

“Last night’s opening episode of series three did not feel real. It felt like a drama-school improvisation class captured on a student’s iPhone. There is cheap and there is shoddy, and repeatedly watching the same Tube trains jerk past the cop shop window is shoddy. Naturalism achieved through improvisation has always been television drama’s most potent weapon but the trick is to use it to convey some sort of truth, not make a Poundland version of Lewis.”
Andrew Billen, The Times

“Hmm, could it be that, having reached series four, they’re running out of Weird Natural Events? A resource running low or, less politely, a barrel being scraped? You’d hope for more from the BBC’s Natural History Department. And if Chris Packham is thinking of succeeding to Sir David’s crown, he needs to get involved with better than this.”
Sam Wollaston, The Guardian

“Nature’s Weirdest Events, back for a fourth series on BBC2, doesn’t need a big budget to make its point, either. What was most impressive was the cumulative effect of all these oddities explored side by side. As Packham said: “The resilience of life to survive and thrive in such weird ways is truly something to behold.” It was only a shame that he said this while cooped up indoors, in a television studio.”
Ellen E Jones, The Independent

“A new instalment of Nature’s Weirdest Events began with a shifty-looking Chris Packham delivering a homily about today’s “connected” world. This was basically one of the BBC’s top-ranking nature presenters apologising for the selection of internet clips he’d been asked to introduce. I could well imagine myself capturing most of these things on my mobile. From my nature documentaries I hope for a bit more.”
Matt Baylis, Daily Express