“Seven million viewers, in this age of about six million ways of watching TV, aren’t easy to come by.” 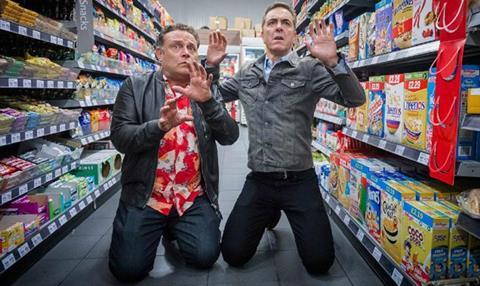 It is a tribute to creator Mike Bullen’s gifts as a writer that, by the end of this hugely successful revival of his once-definingly “thirtysomething” comedy (ITV has already commissioned another series), he had entirely reinvented another life stage.
Gerard O’Donovan, The Telegraph

On paper, this comeback seemed a tad unnecessary, a result of the same kind of misplaced Nineties nostalgia that has led to the return of The X Files and the Spice Girls. In fact, though, its sixth series has been its best yet.
Hugh Montgomery, The i

It could have been a disaster, the reboot of Cold Feet, 13 years on. It hasn’t been – the numbers have been dead impressive. Seven million viewers, in this age of about 6m ways of watching TV, aren’t easy to come by.
Sam Wollaston, The Guardian

The best thing that Cold Feet offers — in all its truths and implausibilities — is respite from the endless cop shows.
James Jackson, The Times

Cold Feet, we learned last week, is definitely returning for another series. We must assume the ITV bosses had seen the final episode before they made their decision, and didn’t let it get in the way.
Matt Baylis, Daily Express

After his campaigns for chicken welfare and misshapen parsnips, who else but Hugh Fearnley-Whittingstall to go global to try to save a species? The man should surely be wearing a cape by now.
James Jackson, The Times

If Hugh had spent longer in pursuit of the poachers, he would surely have found pictures and stories to drive his message home more powerfully. It’s impossible to overstate the plight of the elephants but, in his hurry to pursue the story around the globe, Hugh sometimes risked trivialising it.
Christopher Stevens, Daily Mail

The advantage of being a well-brought-up chap like Hugh is that, when you lose it, you do look entirely authentic about it.
Matt Baylis, Daily Express

Bookworm Andrew Marr made a mess last week of his show about fiction’s great detectives, with a trivial focus on silly voices and dodgy accents. But he redeemed himself with the second part of Sleuths, Spies And Sorcerors: Andrew Marr’s Paperback Heroes which provided an intelligent, knowledgable look at the rules and traditions of fantasy novels.
Christopher Stevens, Daily Mail