“So far as south London capers go, this was about as funny as getting on the wrong side of the Richardsons.” 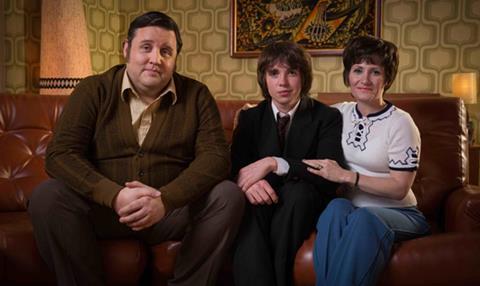 “Something got badly lost in the translation from memoir to televisual nostalgo-comedy, and most of what ought to work to devastating effect just didn’t. So far as south London capers go, this was about as funny as getting on the wrong side of the Richardsons.”
Sean O’Grady, The Independent

“It’s not the most extraordinary of life stories. But Baker’s observation and wit tear about joyously like demented greyhounds. And Peter Kay, who plays dad, travels surprisingly well – from the north-west to saaaaaf-east London.”
Sam Wollaston, The Guardian

“The introductory episode was a cockle-warming hoot. For all the affectionate Day-Glo of nostalgia, Cradle to Grave was also savvy, up-to-the-minute comedy: shot on film, with whip-smart editing and nothing so period as a laugh track.”
Jasper Rees, The Telegraph

““They are good tales, it’s true. This script, though, sometimes made them feel too condensed and glib. It is like a greatest hits album, crammed with bonus tracks. Part sitcom, part social history, Cradle To Grave won’t make much sense to anyone who wasn’t around in the Seventies.’”
Christopher Stevens, Daily Mail

“There were some genuinely amusing scenes and Peter Kay put in a sterling performance as a larger than life but essentially good hearted dad. I was less enamoured of the teenage larks.”
Virginia Blackburn, Daily Express

“A fairly traditional romantic comedy, except that Girl used to be a boy. Some of the issues of being born in the wrong body are touched on, but it’s a shame transgenderism doesn’t come in bolder packaging. Quite sweet though – in a charming, not bad-sugar, way.”
Sam Wollaston, The Guardian

“Here we explored the full-on relationship amusement park that is the new Britain. Unfortunately, the acting, on the whole, and the scripts didn’t really live up to the innovative promise of the series.”
Sean O’Grady, The Independent

“Everyone means well. Apart from the obvious milestone in casting Root, that is about as much you can say so far for Boy Meets Girl.”
Andrew Billen, The Times

“This very modern broadcasting milestone came packaged in a demoralisingly traditional form of comedy. It’s still a big TV moment. I’m just not optimistic that the goal of showing a trans character in a positive light will be best served by bending over backwards to appease a mainstream audience with crude clichés.”
Jasper Rees, The Telegraph

“While it might not have provided the moments of utterly sublime laughter that Porridge once did, it is definitely progress that this once most delicate of subjects can now be put at the heart of a sitcom on prime time TV.”
Virginia Blackburn, Daily Express

“It’s easy to mock the odd Jamie-ism. But he is brilliant. Because once he’s fired up about something, got his head around it and had a little swear, he then sets about doing something about it. I’ve said it before: I’d put him in charge of the country.”
Sam Wollaston, The Guardian

“It doesn’t make for easy viewing – none of your ‘pukka’ or ‘bish, bash, bosh’ joviality here. Oliver is at his most earnest in the film, and it is difficult not to be moved by his anguish.”
Siobhan Norton, The Independent

“The eponymous crusader is ‘fired up’ and ‘angry’ about the sugar this nation manages to get through. He is right, of course. As ever, it is Oliver’s extremism that endears.”
Andrew Billen, The Times