“A script with its tongue so far in its cheek, it practically broke through the skin.” 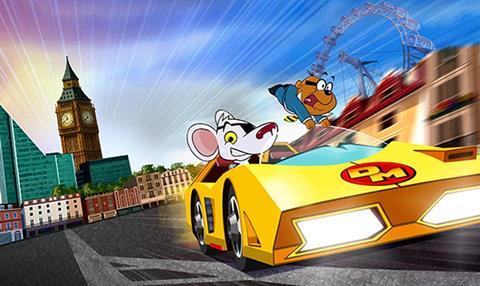 “Danger Mouse is a snappy British triumph. Credit is due to head writer Ben Ward, Hollywood-savvy composer Sanj Sen and animation studio Boulder Media. It’s on every day this week and beyond. Seriously, sit down with a child and catch it.”
Jasper Rees, The Telegraph

“When my parents watched the original Danger Mouse with me, they had to pretend to be “just passing by the television” or “watering the house plants”. Today’s grown-ups will need no such subterfuge to enjoy this reboot of the mouse-bound cartoon adventure show. It comes with a bit of a message but it’s worth remembering that many of the bygone teatime classics had one of their own.”
Matt Baylis, Daily Express

“Thankfully, we were almost as immediately reassured that this return was rich as well as loud. From the first shots of a London skyline – “The Gherkin, the Tennis Racket and the House of Cards” said Dave Lamb’s narration – we saw shining animation and a script with its tongue so far in its cheek, it practically broke through the skin… I wonder if that will be a problem though: that it feels like it’s written for people like me, adults watching with kids, rather than kids watching as adults.”
Alex Hardy, The Times

“By now we all know about social media in which users overshare stuff with cyberpals: their morning jog/cat’s quirks/dog’s dinner. If this is already too much information for you, look away now. Out there in the internet there are people who post their whole sex lives online, and in Sex Diaries: Webcam Couples we were introduced to some of them… This depressing film was made by the dauntlessly curious Charlie Russell, who was in the room watching his subjects being watched.”
Jasper Rees, The Telegraph

“Charlie Russell’s film made good points – about the difference between sex for love and sex for money and about this kind of social media actually being another form of social isolation. It also gives viewers unrealistic expectations. Kitty and Moses gave us something altogether more achievable: from their Midlands front room, with peach wallpaper that probably went up before the internet was invented, they transmitted a hugely awkward fumble with her boob. How encouraging.”
Alex Hardy, The Times

“It sounds like the perfect job, no? Or the perfect way to make a little on the side? Get paid to get laid, but not with anyone, with the person you love … Oh, except that there may be another another side to it. Well, you have to wonder why someone might want to have sex in public, and whether this is a healthy basis for a stable, loving relationship. Plus there are all the expectations and strains – mental and physical – it puts on that relationship.”
Sam Wollaston, The Guardian

“It could have seemed like an intrusive film except that McAllister was almost like another son, saddened and trying to stop this family falling apart. Ultimately, everyone realised that was the kindest way forward… It ended, if not happily, then more calmly than it had begun.”
Matt Baylis, Daily Express

“The most emotional moments, however, came from their sons, in particular the two youngest, Kaka and Bob… it was hard not to weep watching the protracted collapse of a loving group who had once believed that the simple act of reunion would be strong enough to help them survive.”
Sarah Hughes, The Independent