“The show is set in a bitter upstate New York winter and every time it makes you smile your lips get chilblains.” 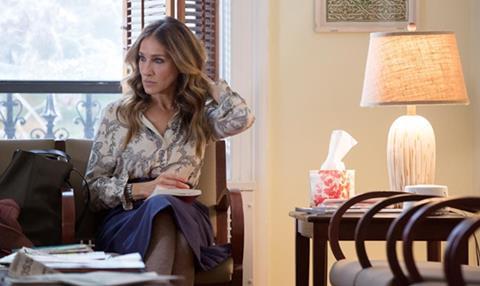 “If you’re round about the midlife stage yourself, or you’ve been in a relationship for a while, and it’s not quite how it was, and maybe you hate their effing guts, then this will all hit home to hurting point.”
Sam Wollaston, The Guardian

“Because this is aimed at the American market, there are some saccharine moments between Frances and her children that feel forced and schmaltzy. But it’s great to see a British sitcom writer succeeding in the world of US cable comedy. Even if we chaps of a certain age will watch Divorce with our legs crossed and our teeth gritted.”
Christopher Stevens, Daily Mail

“It should not matter, but I am glad this is written by a woman, for morally it seems heavily stacked against Frances. The show is set in a bitter upstate New York winter and every time it makes you smile your lips get chilblains.”
Andrew Billen, The Times

“Jack Thorne’s National Treasure was a worthy piece, but it lacked Divorce’s originality. That Paul Finchley, the superannuated TV comedian, was not going to emerge from these rape allegations with his life intact was pretty obvious, and I think most of us would have put money on which piece was going to fall away.”
Andrew Billen, The Times

“Jack Thorne’s riff on Operation Yewtree could have wagged a crude finger at all those free passes for yesteryear’s celebs. Instead, with forensic diligence, it wriggled inside the psyche of a much loved rapist hiding from himself in deals and denials and, finally, the clichéd narrative of an abused childhood. Only now and then did Thorne’s hand feel heavy on the tiller.”
Jasper Rees, The Telegraph

“What gives this sitcom an edge is the authentic air of menace and deprivation, sometimes used as background, sometimes squeezed for laughs, occasionally leaping out to shock. Underneath it all was genuine despair and futility. It was like early EastEnders, and I mean that in a good way – it had a point and it had heart.”
Matt Baylis, Daily Express