“The show was a triumph, fiendishly well plotted and with dialogue to set the screen on fire.” Read on for the verdict on last night’s TV. 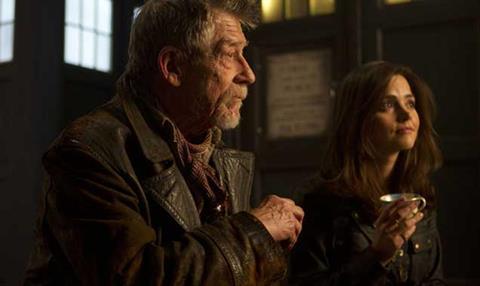 Doctor Who: Day of the Doctor, BBC1

“Steven Moffat managed to pull together the strands of a half-century of a fictional universe, as if the whole series made sense, before pushing it off in new directions at the end. It was a triumphant achievement, loyal to the spirit of the whole Doctor Who enterprise.”
John Rentoul, The Independent

“The main strength of the episode was the way in which the Time Lords had to navigate difficult moral issues – their contemplation of the possibility of genocide was heartrending and the idea that they could save Gallifrey by freezing it in time was breathlessly thrilling… On the strength of this episode, there is no reason why we won’t be celebrating the Doctor’s umpteenth regeneration in 2063.”
Ben Lawrence, The Telegraph

“The show was a triumph, fiendishly well plotted and with dialogue to set the screen on fire.”
Virginia Blackburn, Daily Express

“The playfulness with which Steven Moffat engaged with the biggest issues might justly be called Stoppardian… Moffat’s birthday gift to all us boys and girls is to have ensured that there will be many more anniversaries.”
Andrew Billen, The Times

“It promised to be fabulous. And, of course, it wasn’t. It was patchy, it was cobbled together and, despite some excellent moments, it was a rotten disappointment… He might be the best actor working on British TV, but watching Tennant reprise his turn as the galaxy’s most famous Time Lord was as unedifying as seeing a podgy Eric Cantona or a wheezing Alan Shearer turn out for a charity kickabout.”
Christopher Stevens, Daily Mail

“No great revelations or surprises. Just a fond and thorough look back at Britain’s greatest double act, a ray of sunshine in a dark age of cynicism. Lovely though.”
Sam Wollaston, The Guardian

“Best were the copious clips of the pair in full flow: crooning with a pink frilly shirt-clad Tom Jones, running rings round luxuriantly-sideburned Michael Parkinson and floral-frocked Esther Rantzen on chat shows, struggling to keep straight faces during the ‘Andre Preview’ sketch. This documentary hit all the right notes – just not necessarily in the right order.”
Michael Hogan, The Telegraph

“A fascinating two-part documentary celebrating our greatest double act. Eric and Ernie learned their trade the hard way. They were born funny, but they had to work at becoming geniuses.”
Christopher Stevens, Daily Mail

“Tony Robinson enjoyed Wiltshire’s Wicker Man vibe, got involved in a hippie-dippy escapade with some dowsing rods and made time to chat about crop-circle creation with the locals over a pint of warm ale. This episode of Walking Through History was more in touch with 1970s Britain than Stone Age Britain, but no less enjoyable for it.”
Ellen E Jones, The Independent

“Wiltshire – with all its burial mounds, barrows and stone circles etc to snuffle about – is pretty much paradise for Tony. And he ends up at the big one: Stonehenge. Actually disappointingly small, I always think, but then I didn’t have to lug those stones there.”
Sam Wollaston, The Guardian

“The outcome may not be conclusive, but it’s still absolutely fascinating. And Stephanie Dalley is brilliant – posh and polite, brave, formidable, very English, all at the same time. Like a character from Agatha Christie.”
Sam Wollaston, The Guardian