“One thing is sure: Downton will continue to be adored by millions, as long it offers moments of innocence, extravagance and sheer fun.” 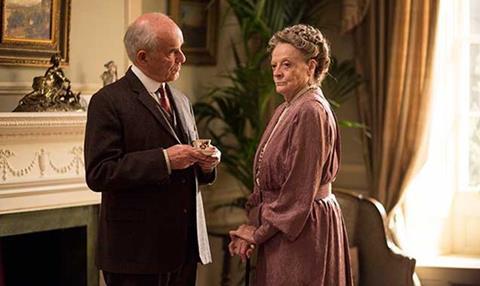 “Last night’s episode reminded me of those elaborate clocks in Swiss town squares, with their little wooden figures popping out to do the same action, every hour, for ever.”
Matt Baylis, The Daily Express

“The liaison between aristocrat and servant was one of several frisky moments which added zest to this feature-length opening episode, hinting that, finally, the cast-iron garters of Victorian England were being discarded.”
Ben Lawrence, The Telegraph

“One thing is sure: Downton will continue to be adored by millions, as long it offers moments of innocence, extravagance and sheer fun… such as Lady Mary’s swaggering entrance to the library last night, to greet her papa. With an imperious jut of her chin, she announced: ‘I’m going upstairs to take off my hat!’ Only in Downton…”
Sam Creighton, Christopher Stevens, The Daily Mail

“ ‘Tis the season of mists and mellow hams, the fifth season of Downton Abbey. Not that Lord Grantham was particularly mellow last night on the soap’s return. From the opening shots of the new-tech telegraphs wires that delivered the news of the sinking of the Titanic in the pilot, change has been as insistent a theme on Downtown as its signature tune.”
Andrew Billen, The Times

“If this slow-moving series eventually unravels (as I think it must) into only the Dowager’s decrepit form, alone at Dower House, whispering cutting asides into the fire, we will be none the worse off for it.”
Ellen E Jones, The Independent

“After the success of last year’s one-off drama about an ambitious female medic attempting to prove herself in the male-dominated British Army, writer Tony Grounds has expanded Our Girl into a five-part series. Unfortunately, the first half of last night’s opening episode left me wishing he hadn’t bothered. The script was poor and the acting even worse, the testosterone-fuelled “banter” between the young soldiers lacking any authenticity or spontaneity.”
Rupert Hawksley, The Telegraph

“The appeal of a tough girl proving herself in a male-dominated world should not be underestimated, but any credibility this series had was undermined by Dawes’s constant whimpering – would the British Army really let this liability loose in a war zone?”
Ellen E Jones, The Independent

“There’s much to like about Our Girl. It conveys the heroism and decency of British forces in Afghanistan, as well as the enervating heat and the claustrophobic threat of enemy attack. But like Molly herself, the show has a lot to prove.”
Christopher Stevens, The Daily Mail

“Our Girl, like Downton, is very watchable. It also has elements of soap (melodrama, ongoing open story etc); certainly it’s more soap than the reality of life for a soldier in Afghanistan, I imagine. Helmanders then?”
Sam Wollaston, The Guardian

“It was down to Clara to make up excuses for his behaviour. Things are going to come to a head at some point if the Doctor continues to live in such precarious manner. But it was the two extra companions, played by Jonathan Bailey and Pippa Bennett-Warner, who really stole the show. They gave compelling performances and there was an instant connection to their characters.”
Neela Debnath, The Independent

“The heist element was thankfully played down, too. At first, it seemed that this might be a wretched Doctor Who-does-Hustle affair.”
Ben Lawrence, The Telegraph